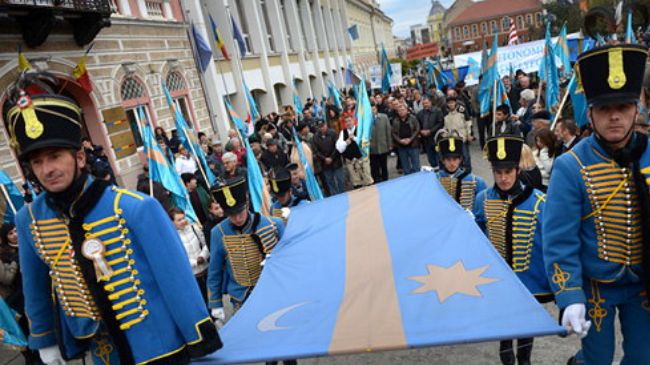 « Many thousands of ethnic Hungarians of Romania demonstrated Sunday in Targu Mures (center) in favor of the autonomy of the » land of the Székely, « the central region of the country where is concentrated the bulk of this minority, » noted AFP. « The protesters gathered in front of the Monument of the Szekler Martyrs (1), erected in honor of the revolutionaries killed in 1854, before traveling the streets of this city, theater in March 1990 of violent inter-ethnic clashes that left five dead. Waving Hungarian tricolor and Szekler flags, they went to the prefecture, where a delegation presented a petition to the authorities.  »

THE SZEKELY QUESTION AND THE HUNGARO-ROMANIAN CONFLICT

« The land of Szekler must become an autonomous region, we ask that it be enshrined in legislation, » told in front of the demonstrators the president of the Székely National Council (SNC), Izsak Balazs, the main organizer of this action. « We also protest against the regionalization project that threatens the existence of the Székely people, » he added, calling on Romanian authorities to « put an end to harassment » of this minority.

This project of the center left Romanian government is to include the current 42 departments of the country into eight regions, which, according to officials of the SNC, would change the ethnic composition of areas where Hungarians are now majority. With 1, 4 million people, the Hungarian community is concentrated in two departments of Transylvania, Covasna and Harghita, where its members account for approximately 80% of the population (2).

The main formation representing its interests, the Democratic Union of Magyars (DUMR), which has 27 elected [representatives] to the Romanian Parliament, announced that it did not participate in this event, even if it emphasizes to support the principle of territorial autonomy for ethnic Hungarians.

« THESE PROBLEMS OF BORDERS AND MINORITIES STEMMING FROM MANY UNEQUAL TREATIES »

« The aftermath of two world wars have not yet finished dividing Europeans », I said recently in Budapest at an international conference. Neither the EU nor NATO have been able to deal with civil wars within Europe for over 60 years. Neither NATO nor the EU could find an honorable solution to these problems of borders and minorities stemming from many unequal treaties, where prevailed the only law of winners.  »
And the willingness of the U.S., the real winners in 1918 and 1945, to create lasting divisions among Europeans. NATO thrives on conflicts since its inception.

The Hungarian right-wing authoritarian government uses the granting of Hungarian passports, assorted with nationality, to Hungarian minorities in Romania to destabilize the Romanian state. The irony of this situation is that the method was invented by Romania itself, this time to destabilize the Republic of Moldova. On which Bucharest claims to have historical rights – those of the militarist Greater Romania of 1918, those of the fascist and antisemitic Romania of Marshal Antonescu, Hitler’s ally – while Moldova, the former Bessarabia, was Russian up to 1918 and Soviet republic after 1939.

In Moldova, it is the Romanian state, which distributes hundreds of thousands of passports – over 800,000 of three million Moldovans – to destabilize the Republic of Chisinau. In a real Europe, in any case they are unacceptable processes.

NATO, imperialist alliance that lives by and for war divides the Europeans, in East and West. The EU, the pseudo « rump-Europe » of Strasbourg and Brussels, vassal of Washington is unable to unite them. Tomorrow, only the unitary and communitarian Greater Europe, the Europe-continent from Vladivostok to Reykjavik, will unite them and put an end to these suicidal civil wars within Europe.

Hungarians, Romanians, Moldavians, like the others, all citizens of the Republic of Europe. These  » united citizens of a giant new Eurasian fatherland », transnational, which already evoked in 1943, in the heart of the storm, the Hungarian Arthur Koestler …

(1) The Székelys or Széklers (Hungarian: Székely, Romanian: Secui) are a Hungarian-speaking ethno-linguistic group present mainly in Transylvania and historically linked to the Magyars. The Széklers originally inhabit the « Székely country » (Székelyföld), a mountainous region located in eastern Transylvania, in the Romanian counties of Harghita, Covasna and Mureş. Székelyudvarhely is their historic capital.
The Széklers formed already a distinct population from the Hungarians since the Middle Ages, and obtained certain privileges (tax exemption) from the Hungarian kings in exchange of the role of border guards they assumed at the borders of the new Magyar kingdom (especially against Tatar invasions in the thirteenth century). In fact, the reputation of the Széklers in the Middle Ages was that of fierce warriors.
In 1437, the Széklers joined the Union of Three Nations of Transylvania (Unio Trium Nationum) in coalition with the Hungarian nobility and the Saxons (ethnic Germans), against the Turks. During the Reformation, a part of the Székely population was converted to Unitarianism, another part to Calvinism (to which also a part of the Hungarians was converted), yet another one remaining catholic.
Transylvania, hitherto autonomous, became independent from 1526 to 1876 after the partition of Hungary between the Austrians and the Turks in the early sixteenth century (see Battle of Mohács), then regained its autonomy status, this time within the Austrian Empire in 1699, but lost this autonomy in 1876 to become part of Hungary within Austria-Hungary until 1918, when integrated to Greater Romania which imposes itself by force of arms.
After 1920, the Széklers are divided between Hungarian nationalism and Székely regionalism.
Széklers are now represented in the Romanian Parliament by the DUMR, which also represents the other Hungarians of Romania. This political organization of ethnic character, which attracts between 5% and 7% of the vote, plays the pivotal role in various government coalitions since the early 1990s. In October 2003, Székely politicians constituted their own political organization, the National Council of Székely (Székely Nemzeti Tanács).

(2) The Széklers are slightly more than the half of the Hungarians in Romania, nearly 850,000 people on 1,434,377 (2002), their proportion may be less important: within the so-called « Hungarian » minority, tens of thousands of Magyar-speaking Roma declare themselves « Hungarians » during the census. The ethnic Magyar constitute up to 6.6% of the total population (2002 census). When given the choice on the 2011 Romanian census between ethnically identifying as Székely or as Hungarian, the overwhelming majority of the Székelys chose the latter. Only 532 persons declared themselves as ethnic Székely..
The Széklers are mostly Calvinists in Transylvania west of Harghita chain which bisects the county of the same name, and Catholics east of this chain, between it and the Carpathians. They have preserved their specific traditions and their dialects over the centuries (sometimes at the cost of violent revolts against the Habsburgs, as in 1514, 1562 and 1600, under the Hungarian and Austrian powers). New tensions emerging after the annexation of Transylvania to Greater-Romania in 1918 and after the fall of communism, and the search for better living conditions, have led several thousand of them to settle in Hungary (about 200 000 people in 90 years). With the accession of Hungary and Romania to the European Union, a return movement has been initiated.
___________________________

Photo: Between folklore and politic, demonstration of the CNSZ – Székely National Council, Romania. 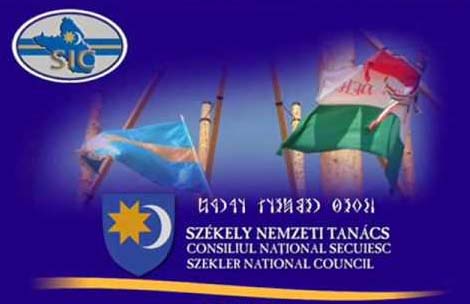 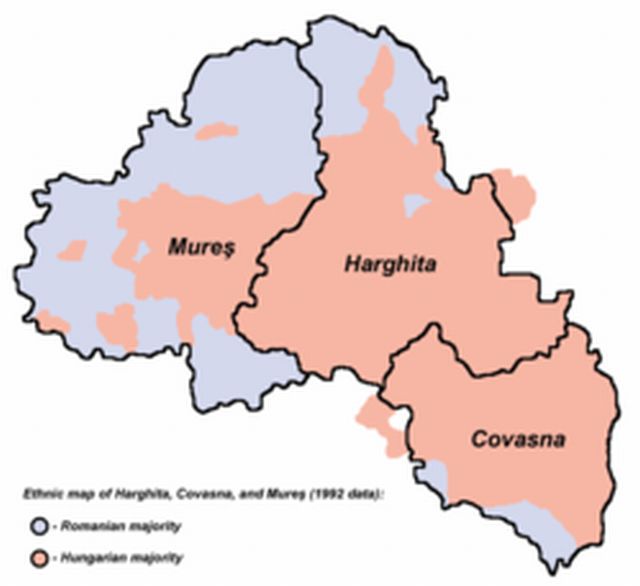 One Response to # PCN-NCP INFO / ROMANIA: THOUSANDS OF HUNGARIAN DEMONSTRATE FOR AUTONOMY …