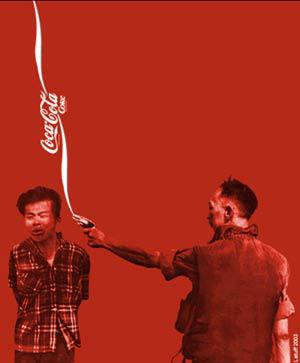 The cultural war in tune with the political aggression …

for NNK with PCN-NCP-SPO & Belga

Coca-Cola announced on Thursday its return to Burma after 60 year absence following the easing of U.S. sanctions against the Burmese government, leaving only Cuba and North Korea away from the famous soft drink.

The U.S. company said that shipments to Burma would be initially from neighboring countries, before local partners being found. The giant of bubbles plans to make « significant investments » in Burma over the next three to five years.

« Coca-Cola has always sided with optimism in times of change and progress throughout the world » (sic), said in a statement the group’s boss, Muhtar Kent. The company has ensured that its activities in Burma would comply ethics, human rights and that the distribution of its beverage would be without bribes.

In addition, Coca-Cola Foundation announced a grant of $ 3 million to support the employment of women in Burma. The old technique of creation of NGOs to complete the political breakthrough and destabilize the target country!

Coca-Cola was absent from the country for over sixty years. The military junta took control of the country in 1962. The Burmese government, which replaced the junta in March 2011 but remains controlled by the military, has multiplied the signs of openness, pushing the U.S. to ease sanctions against that country, particularly with regard to investments. The Burmese regime, as in Libya after 2003, now has a liberal and pro-Western wing.