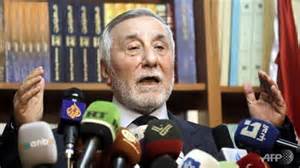 Bahjat Suleiman, the Syrian ambassador to Jordan, speaks to reporters in Amman, this Wednesday, May 22, 2013. Syria’s ambassador to Jordan says a meeting of nations that back the Syrian uprising is part of a U.S.-Israeli campaign to destroy his country. U.S. Secretary of State John Kerry is joining counterparts from 10 nations for the sp-called “Friends of Syria” meeting later Wednesday in Jordan. The others come from Jordan, Turkey, Saudi Arabia, United Arab Emirates, Qatar, Egypt, Britain, France, Germany and Italy.

Syria’s ambassador to Jordan has denounced this meeting of nations that back the so-called Syrian opposition, calling the gathering part of a U.S.-Israeli campaign to destroy his country.

The meeting will prepare for U.N.-hosted international talks on Syria planned for next month.

Syria’s envoy to Jordan, Bahjat Suleiman, castigated Arab nations for attending the Amman meeting, saying they are aiding Washington in its « aggressive, terrorist war, on behalf of Israel, to destroy Syria. »

Syria denies it is facing a legitimate movement for change, but rather a foreign-backed terrorist conspiracy. Obviously it is !