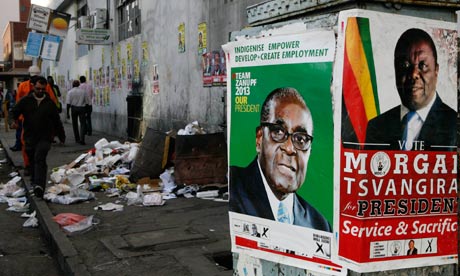 “This is a pivotal moment for Zimbabwe, and the election outcome could mean the difference between a return to the turmoil after the 2008 vote or a continuation of the rebuilding process”

# It appears Zimbabwe is holding elections – presidential, legislative and municipal – today “despite speculation that this was not feasible and funding had not been secured”.

As Zimbabweans prepare to vote in presidential, senate, national and local government elections, what is at stake for the country?

On 31 July, “Zimbabweans will go to the polls to vote in presidential, senate, national assembly and local government elections. The focus will be on the acrimonious battle for the presidency between the incumbent, Robert Mugabe, and the prime minster, Morgan Tsvangirai”, comments The Guardian.

It should now be interesting to watch the candidates as they campaign for the most powerful post in Zimbabwe. Five Zimbabweans including President Robert Mugabe (Zanu PF), Prime Minister Morgan Tsvangirai (MDC-T), Dumiso Dabengwa (ZAPU), Welshman Ncube (MDC) and Kisinoti Mukwazhe (ZDP) are the official candidates for the 2013 Presidential elections. Reports indicate that “about ten individuals had filed their papers to be considered by the Nomination court in Harare”. The Nomination Court seated at the High Court on June 28, 2013.

According to the Electoral Act, all candidates eyeing the presidency are supposed to bring names of 100 registered voters, 10 per province for their applications to be accepted.

There were surprise absentees from the applications to the Nomination court that included MDC president Professor Arthur Mutambara and Job Sikhala of MDC99, who did not file in their papers.

In Chinhoyi last week, thousands of supporters walked out as Mugabe was delivering one his long history lectures. The veteran Zimbabwe leader together with his wife Grace, have also resorted to personal insults targeted at Tsvangirai.

“The two leaders have very different visions for Zimbabwe, comments The Guardian. Mugabe is under pressure from a hardcore section of his supporters to bring foreign-owned companies under « indigenous » control. This rhetoric appeals to Zimbabweans, especially young people, who are often forced to operate in the informal economy, which is traditionally unreliable. Tsvangirai, whose reputation has been tarnished by personal scandals and dissatisfaction with his leadership, wants to encourage foreign investment and reintegrate the country into the international community.”

Robert Mugabe delivers a hardline speech at the launch of his party’s election campaign in Harare, Zimbabwe. And never failed after.

Observer David Smith describes him in another meeting: “Sporting a white Zanu-PF baseball cap, dark glasses and vividly patterned jacket over a pinstripe shirt, Mugabe leaned on a lectern and spoke without a break from noon on Saturday at a pre-election rally in Bulawayo, Zimbabwe’s second city. His wife Grace wore similar party regalia, but her dress bore two large portraits of the president.”

“The crowd was a sea of Zanu-PF green and yellow, chanting, punching the air and waving placards that said: « Man of the people. » Mugabe belied his years and barely broke sweat as he framed the election as an epic struggle against imperialism, railing against Tsvangirai’s Movement for Democratic Change (MDC) as a British invention.”

Tony Blair was « a real liar, downright one, » he declared. « He said we must undermine the government of Zanu-PF and create an opposition for them. »

“What is at stake?”. The Guardian analyses these general elections: “After the violent elections in 2008, Mugabe’s Zanu-PF party and Tsvangirai’s MDC-T (so named to distinguish it from the MDC-N, a breakaway faction of the MDC led by Welshman Ncube, the industry and commerce minister), were forced to form a coalition, which has, against the odds, overseen solid economic growth since 2010, due to the resurgence of agriculture and revenue from diamonds”.

The rebirth of the national economy takes its place in the political – national and international – landscape: “The re-emergence of the agricultural industry is of particular significance, as it formed the backbone of the economy until the policy of land reform was implemented. Now, resettled farmers grow 40% of the country’s tobacco and 49% of its maize. However, the economy is slowing, and unemployment is understood to be running at 85%, with youth unemployment a particular concern (…) Education – formerly an area in which Zimbabwe excelled, with the highest literacy rate in Africa – has been especially slow to recover, owing to a lack of funding and a « brain drain ». Although the economy is the most pressing issue for many Zimbabweans, youth unemployment and education will be two of the country’s long-term challenges.”

“Who will be the likely winner?”, asks The Guardian. “Questions about his personal life and the subsequent smear campaign, especially in the state media, have led to Tsvangirai losing support among urban voters. Zanu-PF has successfully portrayed him as a « western stooge ». The MDC-T has failed to fully mobilise its support and its popularity has slumped from 38% in 2010 to 20% last year, according to a report by Freedom House. But the party believes it will not be denied this time. It claims credit for Zimbabwe’s economic recovery”.

“But backed by the state apparatus, adds the London daily, a Mugabe victory seems inevitable, and many commentators predict a comfortable win against Tsvangirai. The same cannot be said about Zanu-PF. Dogged by infighting between « hardliners », who want foreign-owned businesses to be owned by the black majority, and more conciliatory « reformists », the party appears to be in the midst of an ideological battle. The loss of key politicians has left the party weaker, but loyalty to Mugabe remains strong.”

Read also in French (original article, not a translation !):

With a summary of the latest interview of Mugabe by ITV, on: 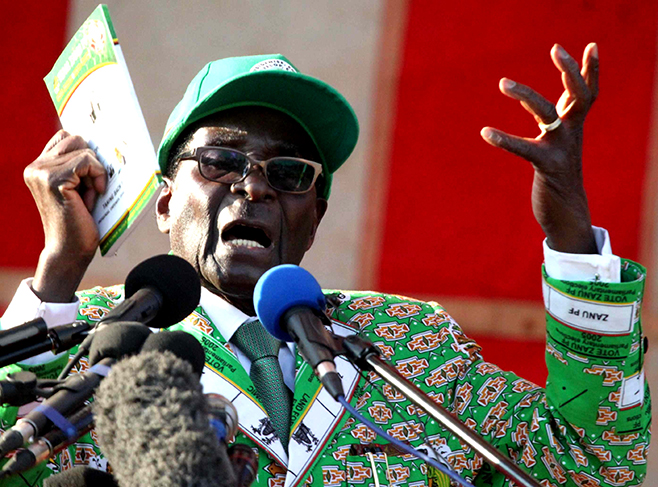