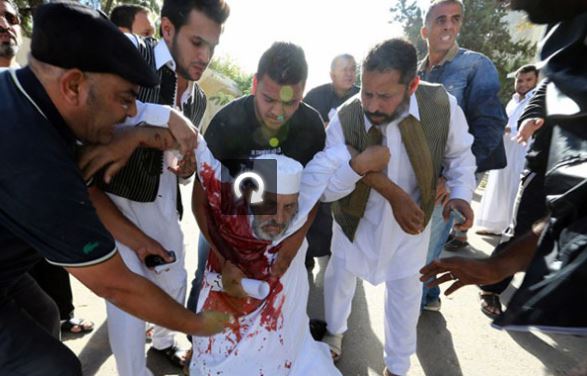 Misrata militias is the legacy of Sarkozy, NATO and zionist lobbyist BHL …

At least 13 people were killed and 130 wounded, many in critical condition, as militiamen reportedly opened heavy fire on peaceful protesters holding a rally near the militia’s headquarters in the capital Tripoli, puppet Libyan state news agency LANA reported.

Libyan Defense Minister Abdullah Al-Thani cut short his visit to Jordan and is returning to his home country, LANA reported. Puppet Libya’s prime minister, Ali Zeidan, is expected to make a statement in the next few hours.

Libyan protesters gather during a demonstration “calling on militiamen to vacate their headquarters in southern Tripoli” on November 15, 2013. Thousands of protesters gathered in the Libyan capital, calling to intensify the security presence and end the militias’ rule established in 2011, after the uprising that ousted leader Muammar Gaddafi. The protesters marched from a downtown mosque to the headquarters of the militia waving Libyan flags and chanting slogans such as « We want an army, we want police. »

The Misrata militia reportedly opened fire with heavy machine guns and rocket-propelled grenades at protesters as they approached its headquarters in the Gharghour district. Misrata militia is a private army with heavy armaments, organised by the French generals of NATO in 2011 following orders of former French president Sarkozy and Zionist lobbyist BHL, the infamous Bernard- Henry Levy.

According to a Reuter’s report, the militia fired an anti-aircraft cannon into the crowd, after which the protesters first fled but then returned heavily armed. The report added that the demonstrators stormed the gated building, and kept the militiamen there until nightfall.  According to reports, the HQ was torched and other buildings in the district belonging to the Misrata militia were raided by demonstrators.

The Libyan Defense Ministry has ordered the country’s armed forces and the police to intervene immediately to restore order. Dozens of trucks reportedly arrived with backup, sealing off roads in an attempt to end the clashes.

The rally was sparked by a string of recent street clashes in which the militia from the city of Misrata, which has a heavy presence in the capital, also played a central role. The violence was also triggered by the killing of one of the Misrata group’s commanders.

Part of the militia was formed from local brigades of rebels including Islamic militants who fought against Gaddafi’s government under NATO supervision with the Western so-called TNC. After the fall of the leader, the puppet pro Western government t”asked the former rebel forces with maintaining security” (sic). However, the militia has not been put under state control, prompting the armed groups to act on their own agenda.

Pics: People assist a man who was injured after Libyan militiamen opened fire on a crowd wanting them to move out of their headquarters on November 15, 2013 in southern Tripoli. (AFP Photo / Mahmud Turkia)