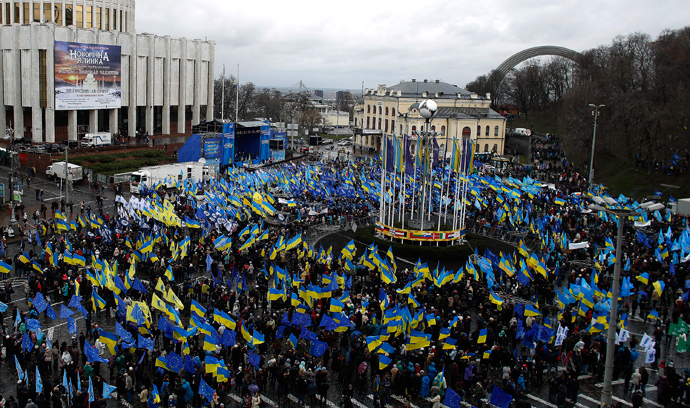 All Ukraine in the streets to join EU?

This is the NATO’s medias so-called information on Ukraine events.

But it is not the reality. One more time.

See this pic. You never see this today ??? … Supporters of Ukrainian President Viktor Yanukovich (democraticly elected) and the Party of the Regions (the majority in the last democratic elections of october 2012) participate in a demonstration at European Square in central Kiev today November 29, 2013 (pic Reuters / Stoyan Nenov).

Outside the Western part of Ukraine, never been a part of the Russian Empire – the traditional base of anti-russian Ukrainian nationalism and fascism in 1918-45, of neofascism and pro Western activism after 1990 -, it is not a majority to support the pro-western leaders and the anti-russian oligarchs such as Yulia Timochenko.

TOWARDS A NEW “COLOR REVOLUTION” IN UKRAINE?

So the solution supported by the EU – in facts and actions the political wings of NATO and really no more the “Europe” – will be a new “coolor revolution”. Such as in 2004 …

The head of Russia’s State Duma Foreign Affairs Committee, Aleksey Pushkov, has predicted that the EU will not support Yanukovich in the next presidential elections, saying the Union now “counts on” the opposition. And on riots in the streets …

“The signal is clear: on the threshold of Ukraine’s 2015 elections the EU counts on the opposition and is already preparing a replacement for Yanukovich. Expect new Maidans [referring to protests at Kiev’s Independence Square (Maidan Nezalezhnosti)],” Pushkov posted on his Twitter page.

We agree with him. Totally.

But where is the so-called “EU values” in this new destabilisation of Ukraine ?

One Response to # LUCMICHEL. NET/ UKRAINE: THE IMAGE THAT NATO’S MEDIAS NEVER SHOW YOU …