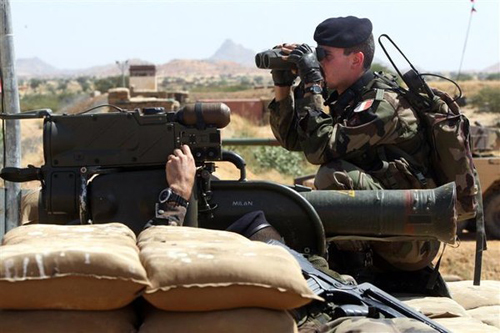 What will be the cost of the intervention in Mali? If we take those of the Libyan aggression presented in a French parliamentary report , in October 2012 , the use of ammunition cost 400,000 euros per day to only Sarkozy’s France. A AASM missile fired from a Rafale on a ground target costs eg EUR 4 000.

Maintenance of equipment and aircraft overhead was estimated at 570,000 euros . Fuel consumption has reached 200,000 euros and the daily allowances of military personnel involved in the operation 270,000 euros. These figures , however, should be much lower in Mali , due to significantly lower means.

In the end, according to a budget expert consulted by BFM Business.com, the French military intervention should cost approximately € 400,000 per day . Provided it does not extend too much …

For imperialist war, France , like all NATO countries , always finds means. For social welfare, on the other hand …

One Response to # LUCMICHEL.NET / NOTICE TO FRENCH UNEMPLOYED PERSONS: 400.000 EUROS PER DAY, COST OF THE WAR IN MALI !