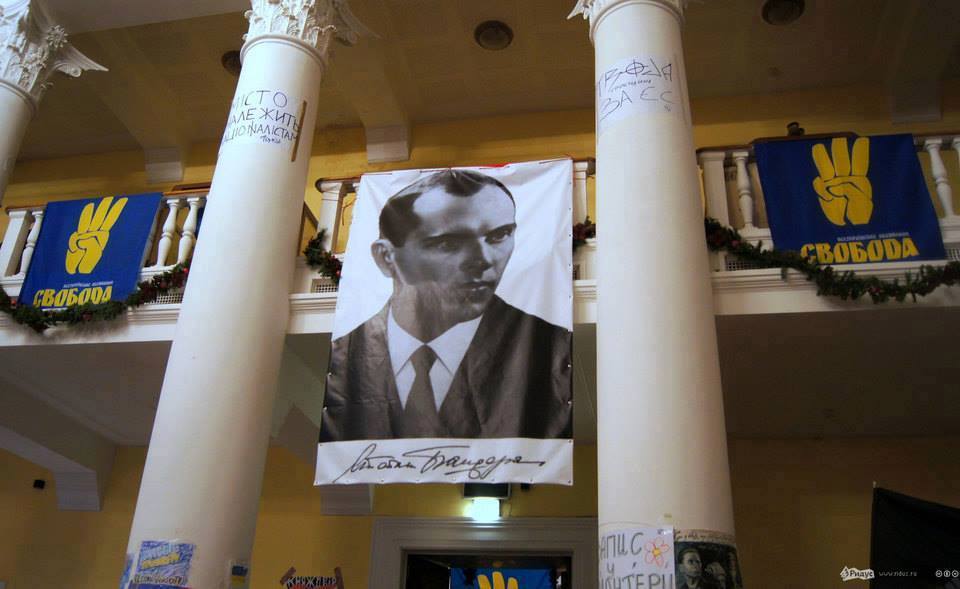 “Antifascists” with zionist links – like Manuel Abramowicz in Belgium or J.Y. Camus in France – are silent on Ukrainian events. No one word on neonazi Praviy Sektor or neofascist Svoboda since the beginning of the Ukrainian crisi late november. Other zionist, the infamous Bernard-Henry Levy – BHL – do not see them in Maidan.

The first explications is in their links with State NATO apparatus. The instructions are to attack hardly the pro-russian networks in EU, and especially the Networks of Luc MICHEL. ‘Luc Michel bashing’ is in the center of their campains. But on EUROPÄISCHER WIDERSTAND, in forefront with the Ukrainian antifascists in the fight against the new ‘Benderovisti’ gangs, no one word. Because it’s do not match with the lies on Luc MICHEL, the founder of EUROPÄISCHER WIDERSTAND…

But maybe another explication exist.
Linked to the scandal that israeli HAARETZ revealed on late March 7: the Israeli Ambassy in Kiev takes an agreement with neonazi PRAVIY SEKTOR against their benderist rivals, the neofascsit SVOBODA!

Agreement aims to ‘prevent provocation’ and denounce the anti-Semitic tendencies of Ukraine’s nationalist camp. Israel’s ambassador in Kiev, Reuven Din El, opened a hotline with a Ukrainian ultra-nationalist neonazi movement to “prevent provocations,” according to an agreement reached last week.

The agreement came at the end of a meeting between Din El and Dmitry Yarosh, the leader of the ‘Right Sector’ paramilitary group, which participated in the overthrow of the government of President Viktor Yanukovych. In the meeting, “Dmitry Yarosh stressed that Right Sector will oppose all [racist] phenomena (sic), especially anti-Semitism (fresic), with all legitimate means,” the embassy wrote on its website. “The parties agreed to establish a ‘hotline’ to prevent provocations and coordinate on issues as they arise,” it said.

Yarosh’s troops had a decisive role in the revolution that forced Yanukovych to flee to Russia. In February, he told the Ukrainian Pravda newspaper that his outfit shares many beliefs with the xenophobic Svoboda party and cooperates with it, but rejects the xenophobia displayed by Svoboda members and leaders. “We have a lot of common positions on ideological issues, but there are big differences. For example, I do not understand racist elements and I do not adopt them,” he said.

Yarosh said that “non-Ukrainians” should be treated according to principles set forth by Ukrainian nationalist leader Stepan Bandera… The Simon Wiesenthal Center and other Jewish organizations have condemned the glorification in Ukraine of Bandera, whose troops are believed to have killed thousands of Jews when they were allies of the Nazis in 1941.

Svoboda lawmakers have regularly used the pejorative “zhyd,” which is equivalent to “kike,” (or the french ‘youpin’) to describe Jews. In response to protests from Jewish leaders, Svoboda argued “zhyd” was a correct and neutral, albeit archaic term. Svoboda’s leader, Oleh Tyahnybok, has in the past referred to a “Moscow-Jewish mafia” which he said ruled Ukraine. Din El and Tyahnybok spoke in March 2013 in a meeting…

What are thinking the zionist ‘antifascists’ of this israeli-nazi agreement? Which could explain their central participation in the curent attacks against the pro-russian networks in Europe linked with the Crimean referendum… Infamous? Obviously yes!