# LUCMICHEL.NET / THE UKRAINIAN ANARCHY AND THE MADMEN OF KIEV: HERE ‘ PRAVIY SEKTOR ‘ WHICH TAKES THE ASSAULT OF KIEV RADA… 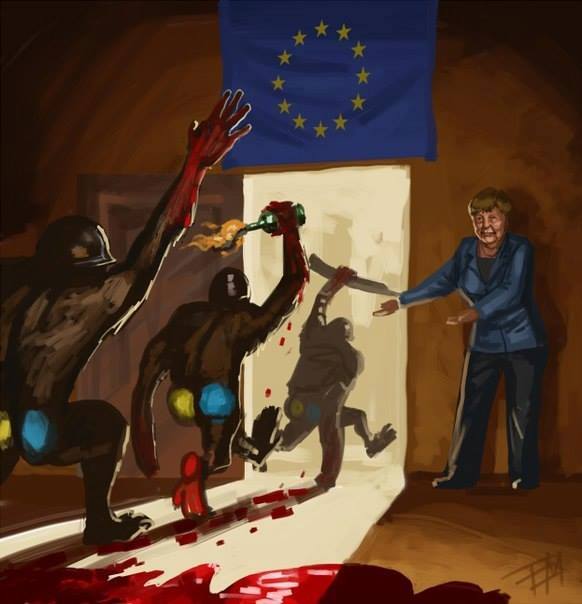 The evolution of the situation in Ukraine and in Kiev and Lviv particularly confirms my analysis of the last two weeks. The analogy I made in my editorial on March 25 on the inner struggle between factions of the junta of Kiev and the German ‘night of long knives’ of 1934 was taken – without quoting me as not to change as the emergence of our transnational Organization upsets so many people… – by many English and even French media. These are the same who seek with us every day, always without mentioning us, topics and arguments of their articles…

About 2,000 members and armed supporters of the radical Ukrainian group Praviy Sektor gathered at the Constitution Square in Kiev outside the headquarters of the Rada. They are demanding the resignation of the interim Interior Minister Arsen Avakov.
Men, masked or hooded, wearing camouflage uniforms.
Transformed into a party last Saturday, RIGHT SECTOR remains primarily a private army, type SA 1933, heavily armed and equipped by the German secret services for the coup of 21 February against Yanukovych.

The first action of Praviy Sektor was held Thursday evening. The activists tried to break into parliament, they smashed the windows of gateways that were pressed.
The demonstrators armed with baseball bats claimed the resignation of Interior Minister designated by the Rada Arsen Avakov following the death of the movement coordinator Alexander Mouzytchko alias Sachko Biliy. Nationalists assume he was killed by members of the security services. Information from the press suggest an execution by two bullets in the head and the heart, hands tied behind his back, by the political police.
Radicals broke the windows of the entrance doors of the Rada and chanted  » Revolution. » The acting president Alexander Turchinov and MP Vitali Klitschko tried to calm them down.
The crowd dispersed once they got the agreement on the formation of a parliamentary commission to investigate the assassination of Mouzytchko. Nevertheless, the radicals have promised to gather again to parliament on Friday.

# On Ukrainian anarchy, listen to my last interview by journalist Ygor RAZON for THE VOICE OF RUSSIA:
I describe the political anarchy, the struggle between factions of the Junta of Kiev, the outlook and the real possibilities of a presidential election on May 25, the rise of neo-Nazi Praviy Sektor…
Audio in French
http://french.ruvr.ru/radio_broadcast/5646129/270323484

The madmen of the Junta of Kiev – all tendencies, an equally radical Tymoshenko – led Ukraine to the outbreak, the risks of civil war are high, the confrontation with the Russian-speaking population in the East permanently. My conclusion is pessimistic about the future of Ukraine. President Bush (senior) said in 1991 in Kiev that “Ukrainian nationalism was suicidal”. He was right…