# PCN- INFO / SCENT OF ‘COLD WAR’ IN THE BALKANS AND IN THE BLACK SEA: BUT WHO THREATENS PEACE? 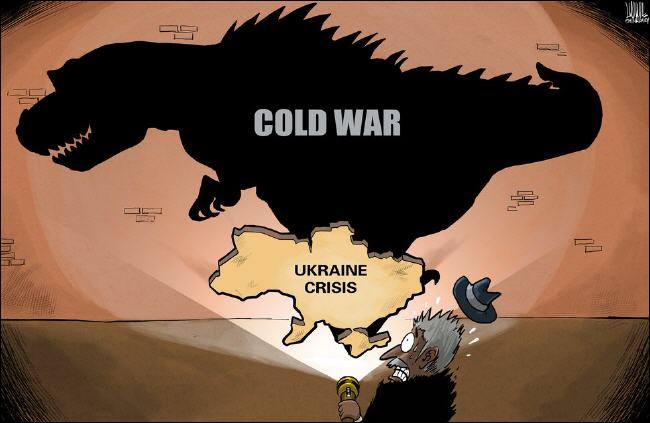 « The Ukrainian crisis plunges again NATO and Russia thirty years back with the return of suspicion and propaganda methods forgotten since the end of the Cold War, » commented today the AFP. « NATO and Moscow remember that they were the best of enemies, » said an officer based in Brussels , where are the Atlantic Alliance headquarters. « The oldest of us found reflexes they had abandoned many years ago”, reflects the military under the guise of anonymity. « In the offices of NATO , maps of Ukraine are now pinned on the walls alongside those of Afghanistan , the country that monopolized all the attention until recently ». And « Russian experts are again listened to very much, » says a diplomat.

In recent days, the tone became more acrimonious between Moscow and NATO, which accuse each other to revive the spirit of the Cold War, that of the confrontation between the United States and the USSR between 1947 and 1991 . « Nobody wants a new Cold War. Russia must stop wanting to go back », dares claim on Thursday the secretary general of NATO, Anders Fogh Rasmussen (… the idiots dare all said Audiard ) . It is NATO that « cultivates the rhetoric of the Cold War, » denounced rightly in return the Russian diplomacy.

BUT WHO ACTUALLY THREATENS PEACE?

« These allusions to the Cold War are a heresy as well in the geopolitical as in the military level, » says Philippe Migault, researcher at the Institute for International and Strategic Relations (IRIS pro-Western). « Putin’s Russia (…) does not directly threaten any NATO countries, » he adds. In addition, « the balance between the two blocks does absolutely not exist anymore » because the military budget of NATO countries is now twelve times that of Russia.

The crisis in Ukraine is considered « the most serious for NATO -Russia relations since the fall of the Soviet Union. » « Let’s face it: the NATO-Russia relations have always been chaotic and there is no reason for it to change », warns a Brussels-based diplomat.

But it is not the first since the divisive issues were multiple: NATO enlargement to the east (Baltic States, Poland, Romania ) in violation of the commitments guaranteed to Russia, the Kosovo crisis, the EU partnership in the east that is aiming to remove the ‘near foreigner’ from Moscow, missile shield that Moscow perceives rightly as a threat despite the denials of the Allies. In all cases it is Russia which recoils and is threatened…

Ukraine and Crimea were the step too far of Westerners in this new « Drang nach Osten ». As Putin said, a red line has been crossed and NATO and its political arm of the EU (as it is no longer anything else) bite their fingers.

Welcome to the post ‘new world order’ world. Yalta (and its borders of 1945) and the NWO of 1992, it is finished. That is the ‘ geopolitical revolution ‘ of the Crimea…