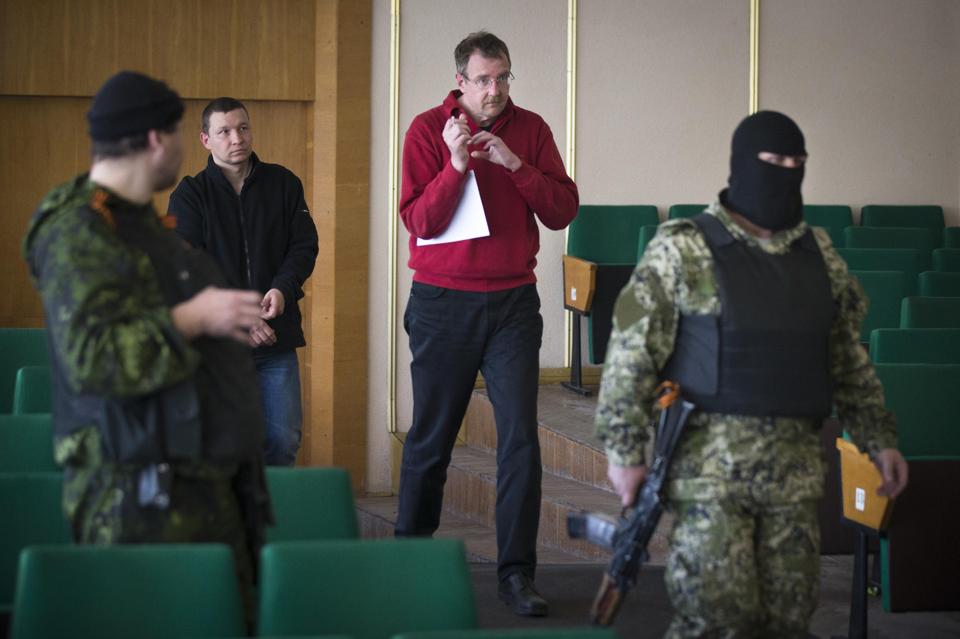 For several months we have drawn, in a glacial media silence, attention to the role of the occult German secret service BND ( and KSK, the not well known special forces of Berlin ) in the color revolution in Ukraine. Here are the secret agents of Ms Merkel taken in Slavyansk …

« YOU CAN PUT THE OSCE LOGO ON A VEHICLE, THAT DOES NOT PREVENT ME FROM RECOGNIZING UKRAINIAN AGENTS  »

- THE MAYOR OF SLAVYANSK.

Since this morning , the media of NATO fold our ears with « An OSCE Mission held hostage by pro- Russians in Slavyansk ». Nobody listened to the ‘people’s Mayor’ of Slavyansk explaining that they were Ukrainian secret agents .  » You can put the OSCE logo on a vehicle, that does not prevent me from recognizing Ukrainian agents » he explained .  » They have nothing to do with the OSCE, they are servicemen « , had yet said the leader of Slavyansk Vyacheslav Ponomaryov stressing that they had entered the city without « permission » and that he suspected them of  “intelligence activities”.

Words immediately questioned by AFP: « The separatists on Saturday accused the OSCE observers held in eastern Ukraine of being « spies of NATO  » and said they would only be released in exchange for  » their own prisoners. » « Yesterday we arrested NATO spies , » said Denis Puchilin, one of the leaders of the separatists referring to thirteen people including seven representatives of the OSCE and their Ukrainian escorts held yesterday.  » They will not be released. They will be exchanged for our own prisoners. I see no other solution, » he added in front of the headquarters of the security service (SBU) in Slavyansk , stronghold of the pro -Russian insurgents in eastern Ukraine, where they are held.  »

Cries in Washington, injunctions in Brussels and Berlin. Except that the insurgent leader of Slavyansk was right!

The persons held in Slavyansk « do not actually belong to the OSCE mission . »

Claus Neukrich , representing the direction of the Organization for Security and Cooperation in Europe , confirmed live on Austrian television channel ORF that « the persons held in Slavyansk did not act within the scope of the mission of the OSCE and were not its observers ».  » In the meantime we have had no contact with them. To be precise, these are not military advisers of the OSCE, but military observers who went there alleging an OSCE mandate . Negotiations with Slavyansk are not conducted by the OSCE, but by the Ministries of Defence and Foreign Affairs of Germany, they have there three servicemen and an interpreter. And by the Government of Ukraine, which has invited these experts , « said Claus Neukrich .

Polite way of washing his hands in face of a reconnaissance commando action come to prepare the next attack on Slavyansk and to locate places .

Note that yesterday evening , the German government shamelessly lied about the incident.

« On Friday evening , the German government announced that thirteen members of a mission of the Organization for Security and Cooperation in Europe ( OSCE) had been captured and were being held by pro-Russian separatists in the east of Ukraine. The separatists on Saturday accused the observers of being « NATO spies  » and said they would be released in exchange for « their own prisoners’’ » said AFP certifying the media lie of Berlin and questioning the word of the pro-Russians . The head of the German Foreign Ministry Frank -Walter Steinmeier, even intervened with Lavrov that Russia put pressure on the rebels so that  » the OSCE team is immediately released  » (sic) .

The concern is that  » lie follows the liar as tail follows the dog  » ( Hungarian proverb ) . But Berlin is tonight taken its nose in its lie! Apart from that, they are the Russian services which act in Ukraine …