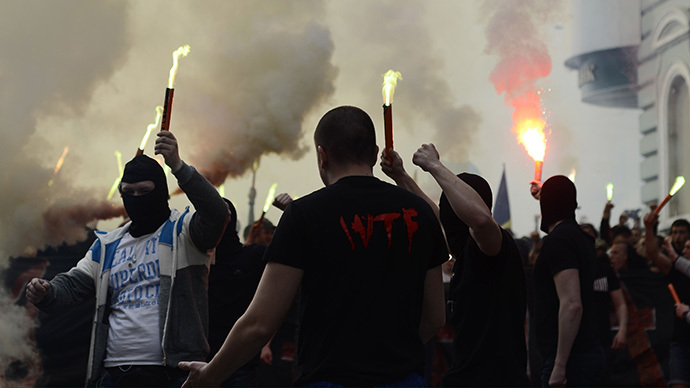 Peaceful rallies in eastern Ukrainian city of Kharkov turned violent as a crowd of several thousand football ultras attacked a crowd of some 300 pro-Russian protesters. At least 14 people were injured, including two law enforcement.
Thousands of fans of two Ukrainian football clubs Dnipro and Metalist have gathered in Kharkov’s Constitution Square where they joined some 250 pro-Kiev activists holding a rally.
Up to 5,000 ultras, according to local media estimates, intended to march in support of the country’s unity from the Square to Metalist stadium, which is some 3 kilometers away and where the game between the two clubs started, as scheduled, at 19:30 local time (16:30 GMT).
The march started with Ukrainian anthem and drum-rolls. Football ultras, some equipped with burning torches and petards, were chanting “Glory to Ukraine. Glory to heroes!” and “Ukraine’s above all!”

According to local media, several groups from the Right Sector radical network also took part in the rally.
A massive fight erupted when the football ultras reached the street where the anti-Kiev protesters with St. George ribbons were holding their rally in support of broader regional autonomy from Kiev.
http://www.youtube.com/watch?v=0TJFMpFFFjs&feature=player_embedded

Multiple videos shot by local TV channels show crowds of masked football fans chasing and beating activists. This footage from the scene below shows a group of fans severely beating a man lying on the ground (00:59).
http://www.youtube.com/watch?v=594HWc_WEBo&feature=player_embedded

Local police confirmed that 14 people sustained injuries, including two of its officers. At least eight of the injured have been taken to hospitals, while another six received help at the scene where ambulances were immediately dispatched. Volunteers from the Red Cross also arrived to provide assistance.
The football ultras smashed cars and beat random people. This man in the video below is seen with his head covered in blood and the windshield of his car broken in pieces.
http://www.youtube.com/watch?v=HZWsht8KRSo&feature=player_embedded

Kharkov police said aggressive football fans were using baseball bats and sticks.
Despite the damage and violence, no attackers have been arrested.
According to local Vesti.ua the fight seems to have been planned in advance.

YES the Russianspeaking citizens of Eastern Ukraine are in danger in the new Ukraine of the Kiev Junta !