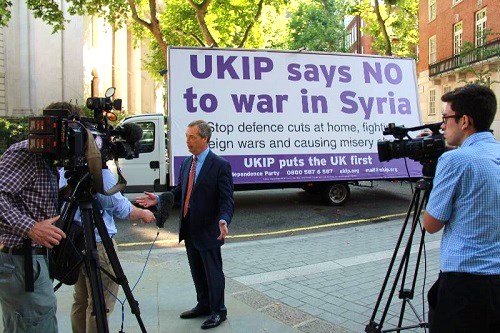 Photo: Campaign of UKIP against the NATO strikes in Syria (September 2013).

« Nigel Farage formed his group in Parliament thanks to a dissident of the FN » writes AFP. In the match between the British Farage (left and right-wing anti-system populist) and Marine Le Pen (far right), the first has just knocked out the second, once more more arrogant and sufficient than efficient. Of Marine, we can say what King Leopold III of Belgium said of the fascist leader Léon Degrelle « very adequate and very inadequate ».

And Farage has done it with Marine’s own troops: her Swedish allies past to the enemy, and, the icing on the cake, with a dissident MEP of the FN (yes, already a dissidence within 25 days after the election of May 25!).

« THE VOICE OF THE PEOPLE » SAYS FARAGE

The leader of the British anti-system party UKIP – described as « anti-European » by the media of NATO -, Nigel Farage, the one Marine treated with contempt as « drunkard » (sic) has thus just inflicted a major political defeat to the FN. Nigel Farage announced Wednesday the formation of a group in the European Parliament « after a dissident of the French Front National rejoined him » and with the Italian MEPs of Beppe Grillo (unclassifiable anti-system populists and not belonging to the extreme right).

» I am very proud to have formed this group with other MEPs and we undertake to be the peoples’ voice « , said the head of UKIP in a statement released in Brussels. “We will be at the forefront working for the restoration of freedom, national democracy and prosperity across Europe” he added.
The group called EFD (Europe for Freedom and Democracy) will have 48 members including a dissident of the FN, Joëlle Bergeron, elected in France on the lists of Marine Le Pen, but then refused to give up her seat despite the injunctions of the direction of that party. For political fraud, the FN is also at its lists. Legally obliged to apply the men / women parity, the FN has let elect women. Then it wants to replace them with men, designated in advance. There dishonesty returned to Marine as a boomerang!

« The formation of this group is a blow to the president of the Front National (FN) Marine Le Pen struggling to bring together elected representativess from seven countries and has so far with her only four other European parties » commented the AFP.

In addition to greater visibility and possible committee chairmanships or parliamentary subcommittees, having a group gives the assurance to receive between 20 and 30 million in grants over the next five years, excluding salaries and benefits of MEPs.

Le Pen and Farage, both resolutely hostile to the EU and Farage to NATO, put their party at the front of the European elections in their respective countries. But under very different conditions. In France, the FN in a climate of rejection of party power and 60% abstentions (REAL ‘largest party of France’), UKIP in a real anti-party vote in its favour. As its ally Grillo in Italy. Refusing to form a common group because they have nothing in common except their opposition to the EU, Farage and Marine Le Pen each showed their desire to create their own group. In the outgoing Parliament, N. Farage already led the EFD Group, while the Le Pen, father and daughter, sitting among non-enrolled.

The president of the FN, who can count on forty elected representatives (including 23 FN), but who lacks two countries for the account to be good, began negotiations with the Polish Euro-sceptic party ‘Congress of the New Right ‘(KNP, far right-wing ultra-Catholic), which has four elected representatives. But also a grain of sand came unexpected sinking the Le Pen machine: the issue of homophobia. Indeed, the Dutch allies of the FN, the PVV, is reluctant to be together with an openly homophobic party. And the Poles, ultra-catholics duly warned by former members of the French FN driven out by Marine, are wary as of the plague of the gay lobby around the president of the FN (*).

Courted by the FN, the right-wing populist Lithuanian party Order and Justice (TT) finally chose to stay in the group of Nigel Farage. Another failure.

The FN saw its quest for partners « darkened », said AFP and this is an understatement, by the recent controversial statements by Jean-Marie Le Pen, honorary president of the party. Discussing of French artists hostile to the FN, whose singers Patrick Bruel (Jewish) and Yannick Noah, Le Pen father has launched « a batch will be done the next time. » Marine Le Pen said that the statement was « a political mistake. » Followed by all her new guard, opening a serious crisis within the FN.

The anti-Semitic image of the Front National has made it lose potential partners in the European Parliament. Natural allies of the FN, the Sweden Democrats (SD, far right), with whom they sit within the European party ‘European Alliance for Freedom ‘(EAF), have distanced themselves. The two elected members of the SD joined the EFD.

Groups have until June 23 to set up …

THE VICTORY OF NIGEL FARAGE WILL HAVE MAJOR POLITICAL CONSEQUENCES

The FN is a party of the system, a party responsible for stemming discontent of right wing, and which primarily serves the material appetites of the Le Pen Clan, which made its fortune in politics. The FN at the head of populist parties, it would have meant the stagnation thereof throughout Europe. What is the FN used for in France? For nothing. Have you heard the Le Pen in the European Parliament? Never, they are among the least frequent MEPs. Those we hardly see only in plenary sessions where attendance is mandatory to get the handsome allowance of MEP.

Farage is entirely something else. Everyone knows his diatribes against the Commission or President Van Rompuy (for which he was suspended). Grillo is the same in Italy. Real anti-system parties. While in the EAF of the FN there is only one true anti-system party: the Flemish republicans, anti-monarchist and anti-Belgian of the Vlaams Belang (which would benefit with Farage’s group).

In foreign policy, too, the FN only searchs the immediate advertising. On the Referendum of Crimea, Marine Le Pen has changed three times position in 4 days and disavowed with mid-words her advisor Chauprade (authentic pro-Russian and who is better than the FN). And her supposedly Russophilia is only a posture. The FN was close to the Banderist neo-fascist anti-Russian Ukrainians of ‘Svoboda’ still a year ago (**). An old link since Jean-Marie Le Pen was already present in May 2000 at the 6th Annual Convention of the SNPU (the ‘Social National Party of Ukraine’ which has become Svoboda in 2004), where he states that « Having a statue of Lenin in Kiev is like having a statue of Adolf Hitler in Tel Aviv. «

Farage’s UKIP, for its part, took position and organized real campaigns against the war in Syria that NATO wanted. And took a firm stand on the Crimea or support to Russia.
UKIP leader Nigel Farage condemns Tony Blair’s support for Western intervention in the Middle East. On 15 June 2014, Nigel Farage today spoke out against Tony Blair’s comments on the present situation in Iraq and Syria. The UKIP leader said: « In almost every country in which the West has intervened or even implied support for regime change, the situation has been made worse and not better. « This is true of Libya, Syria and of course Iraq. Tony Blair’s state of outright denial of the obvious consequences of his disastrous decision-making on Iraq is making increasingly uncomfortable viewing. »There was no place in Iraq for Al Qaeda or its affiliates under the dictatorship of Saddam Hussein. Yet now the country is over-run by Islamists who are also making advances in Syria and the whole region is sliding towards a full-scale Sunni versus Shia conflict. »
The group of Farage and Grillo will be a real opposition force to the system throughout the EU.

A group that will receive our support.
This required the defeat of the president of the FN and her interested maneuvers.
Well done Nigel!

(*) On the role of homophobia in struggles around the FN; in France and Europe, read (in French) on the anti Marinist ultra-Catholic right-wing website BREIZ ATAO:
How gay and Gaullist technocrat Florian Philippot secretly organized the liquidation of Le Pen
On http://breizatao.com/2014/06/13/comment-lenarque-homosexuel-et-gaulliste-florian-philippot-organise-secretement-la-liquidation-de-le-pen/#.U501fgzSWc4.twitter

(**) On November 23, 2009 in Nanterre, the Front National, represented by its President Jean-Marie Le Pen and its Vice-President in charge of international affairs Bruno GOLLNISCH, received in its headquarters the leader of the Ukrainian Party « Svoboda » Oleh TIABYGNIOK and his colleague in charge of International Relations Taras OSAULENKO. Purpose of the visit: Signing a Memorandum of agreement between the two parties within the union of patriots.
Until February 2014, the video where JM Pen receives Tiabygniok, head of Svoboda in Nanterre, in 2009, was visible on the website of the Front National. It was deleted since then, but you can find it elsewhere:
http://www.dailymotion.com/video/x1fu5yb_les-nazis-de-svoboda-ukraine-et-le-front-national-pour-un-nouvel-ordre-mondial_news