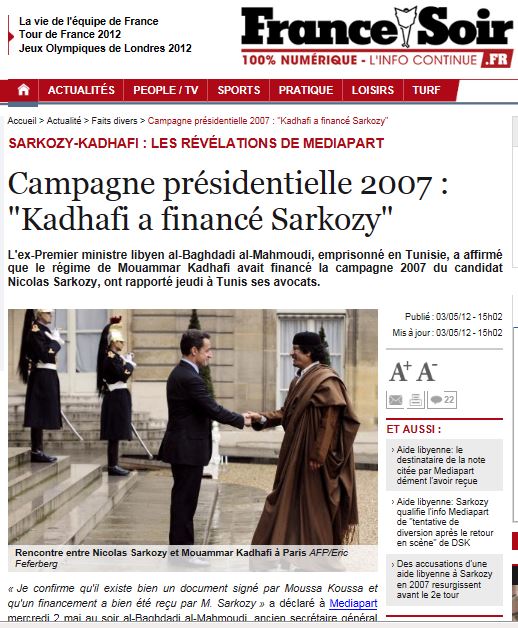 At the origin of the affair earning Nicolas Sarkozy his new woes, the phone taps in September 2013 in the investigation of charges of financing by Libya of Muammar Gaddafi his successful 2007 campaign…

SARKOZY INDICTED, THE PS AT 6%: REGIME CRISIS IN FRANCE…

Nicolas Sarkozy mis en examen (= being charged or arraigned or put under official investigation) this night in particular for active corruption and Thierry Herzog, the lawyer of Nicolas Sarkozy, indicted… After the collapse of the PS – which organizes the hunting of Sarko – and the left at the European Elections governing with 6% of voters (and 60% of abstention, the real ‘first party of France’), the French parliamentary system is in serious crisis.

« Sarkozy, breathless, » comments LA LIBRE BELGIQUE (Brussels):.. « The results are dramatic. France is breathless The left is flat. Without ideas, without plans, without vision. The right tears and washes its dirty linen in public. « These legal developments come amid when rumors about his willingness to take in Autumn the head of the right-wing UMP party are more accurate. « If some sarkozysts had denounced during the day his putting in custody, no tenor of the right came to defend him, » said AFP.

The former French president Nicolas Sarkozy has been put under official investigation in the night from Tuesday to Wednesday, in particular for corruption and misuse of influence, a dramatic extent when his political comeback is on everyone’s mind. Before receiving the former president, the judges had put under official investigation in the evening his lawyer, Thierry Herzog, and the senior magistrate Gilbert Azibert. The former president arrived shortly before 8:00 at the Central Directorate of the Judicial Police in Nanterre (DCPJ) in the western suburbs of Paris, not far from his former stronghold of Neuilly-sur-Seine. After about 15 hours of custody in the premises of the anti-corruption office (Oclciff) – a first for a former head of state – he was taken to the financial hub of the Paris court to be presented to the judges. They have charged him for concealment of violation of professional secrecy, corruption and misuse of influence, prosecutors said in a statement to AFP. He is not subject to judicial review. Corruption and misuse of influence are punishable offenses up to ten years in prison.

In the Libyan affair, several of his close friends had first their mobile phones been tapped: former ministers Claude Guéant and Brice Hortefeux, but also Michel Gaudin, former head of the national police and ex-police chief of Paris. The latter became his chief of staff after the defeat of 2012, and had in the spring of 2013 several conversations that challenge investigators. He seems to want, in vain, to learn about the Libyan investigation from a responsible officer. Judges decided to tap the former president’s phone, especially the phone he uses under the borrowing identity of Paul Bismuth (the name of a French-Israeli Zionist activist, former member of the Betar militia and close to the CRIF) to converse with Mr Herzog. However, trade between the two men may suggest that they sought to obtain confidential information from Gilbert Azibert.

Judicial obstacles are on the road to a return of Nicolas Sarkozy in politics. In addition to the Libyan financing cases and alleged misuse of influence, the Paris prosecutor gave to financial judges an investigation on the financing of the 2012 campaign of Nicolas Sarkozy. His rallies appear to have been largely funded by the UMP to hide an over the limit of the campaign spending authorized by law. « Can he come back? « questions Libération…

All this is, beyond the offender Sarkozy is, obviously orchestrated by the PS that controls justice and police. But the PS spindoctors, who have already believed being smart to play the FN card – a mere pawn on the French political scene since always, created by the Pasqua networks in 1972, exploited by both the right and left at the mercy of political cycles – with the results that we know since May 25, would be very wrong to rejoice. That’s all the French parliamentarist regime that is in deep crisis!