# PCN-SPO / WHY THE USA IS HAPPY OF THE WAR OF EU-RUSSIA SANCTIONS! 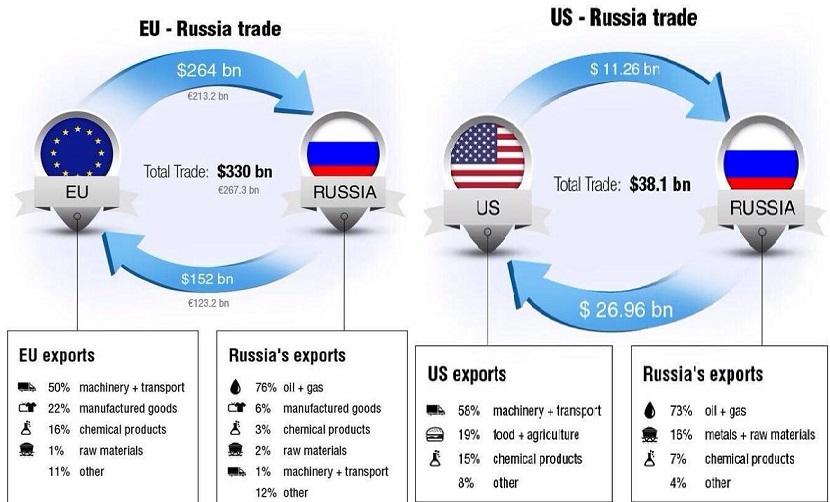 When looking at who is impacted by the economic sanctions against Russia, the figures speak for themselves.

The USA exports almost nothing to Russia, it does not care about trade with Russia, this is not the case with the EU which trade balance is a net exporter …

Again, our leaders and the EU act against the interests of Europe and its peoples …

But do not worry, for EU officials the EU can take the shock, it will not affect their lavish salaries. Besides, they are already thinking about the next sanctions.

Trade is the best cement to build peace among nations.

1 / They prevent precisely the trade, just see the embargo, all quite logical, decreed by President Putin.

2 / They rot diplomatic relations, which also continue to deteriorate.

It’s really a diabolical strategy aiming to oppose the two European blocs, both Europe, the Brussels one and the Eurasian one of Moscow, one against the other. It is clear here that if it continues like that, war is inevitable. At least a new Cold War.

And we give you an example, the EU will go and complain to the WTO, because Putin has a retaliatory embargo on food products from Europe, what nerve!

And they plan to introduce new sanctions for that. You see it is not even necessary to use Ukraine as an excuse. And we enter into a new cycle of vengeful sanctions, which does not need to be justified to the citizens of the EU. The circle is complete … And Washington is happy!