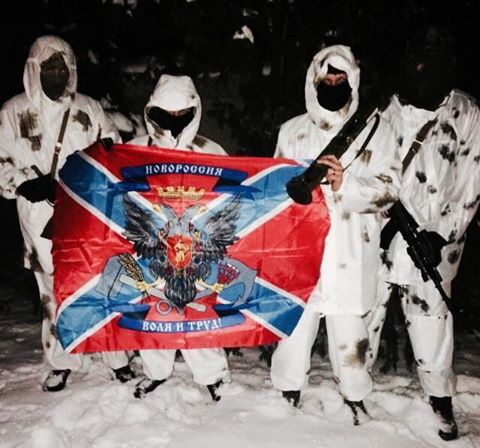 While war criminal Poroshenko rallies shamelessly in Paris with his
Western masters and accomplices, shamelessly taking advantage of the
smokescreen of French attacks, the Army of the Junta of Kiev broke the
truce.

HERE IS A SUMMARY OF MILITARY OPERATIONS OF THESE LAST DAYS BY OUR EXPERT FABRICE BEAUR (FROM MOSCOW):

DNR / Donetsk: since yesterday President Zakarenko has given order to
reply now to all the shots. This was not the case so far.
Basically, they remain in their strategy (dictated by the Minsk
agreements) of a defensive line but in « automatic reply » mode.
While the Forces of the Junta of Kiev are in « local offensives » mode
here and there. And gain here and there small parts of territories.

In LNR / Lugansk: heavy artillery was moved on the front in order to
be « fully prepared to launch the counter-offensive  » (we are talking
about the Donbass side).
Everywhere, including in the heart of the two independent capitals,
the Army of the junta kills innocent civilians. « Charlie » here is also
used to do the dirty war in Donbass …

ITAR TASS CONFIRMS (JANUARY 15):
DONETSK AIRPORT IS ENTIRELY IN THE HANDS OF THE REPUBLICAN FORCES!

The Ukrainian Armed Forces withdrew their units from the airport of
the very troubled eastern city of Donetsk although autonomous elements
of the army are deployed in the neighborhood, according to the press
service of the Ministry of Defence of the self-proclaimed People’s
Republic of Donetsk on Wednesday.

Not more than during the massacre of Odessa in May 2014 (between 45
and 200 dead and a stifled investigation by the junta) (*), Westerners
show no empathy with Ukrainian civilians killed by their own
« government » and its neo-fascist punitive militias.