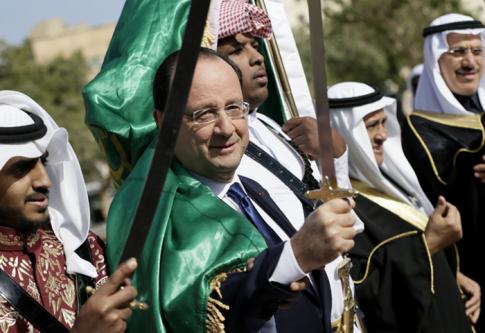 When Westerners greet shamefully the death of King Abdullah, the godfather of jihadist terrorism, the Wahhabi autocrat of Ryad (see the lamentable statements of Obama, « I’m Charlie » Hollande or Lagarde of the IMF), the GUARDIAN launches a pad in the pond with the cartoon by Martin Rowson (in illustration of this PCN-Info, inspired by the three monkeys of Chinese wisdom, with Hollande in eructing baboon…)

AFTER HAVING DEFENDED ‘CHARLIE’ AND AFTER POSING HIMSELF AS CHIEF OF WAR AGAINST TERRORISM (SIC) HOLLANDE GREETS THE LEADER OF WAHHABISM, IDEOLOGICAL MATRIX OF ALL JIHADISMS!

Or how in two weeks to make fool of 67 million French …
De Gaulle said that « French were calves. » With Hollande they are useful idiots (*) to support a policy decided not any longer in Paris but in Washington.

As for the « freedom of expression » (limited to those who think like the French system), we know the history of this blogger sentenced by the pseudo Saudi justice under orders (as in France) to 5 years in prison and 1,000 lashes for press reports. During the mourning period, flogging (50 shots for 20 weeks) of Raef Badawi is suspended. What does say the Elysée on the obscurantism of this country? Badawi is not ‘Charlie’ ???
And presstitutes under orders of NATO media such as LIBERATION, do not even see the irony of the situation …

IF HOLLANDE MOCKS THE FRENCH, LAGARDE IMF DIRECTOR, SHE MAKES FOOL OF THE ENTIRE WORLD!

And obviously of the cause of women …
The IMF Managing Director Christine Lagarde also currently in Davos for the World Economic Forum, spoke about King Abdullah’s death. She says with a straight face particularly that the King was a « strong supporter of women » (sic) …

* See Video for this statement:
http://videos.lexpress.fr/actualite/monde/video-deces-du-roi-abdallah-c-etait-un-ardent-defenseur-des-femmes-pour-christine-lagarde_1644004.html

THE DEFENDER OF WOMEN IN ACTION …

Message to Christine Lagarde who thus informs us that Dictator King of Saudi Arabia is « a champion of women’s rights! »
We invite her to see this video where the woman shouts « I am innocent, I ask just judgment, mercy » …
Decapitated like an animal in the street … that’s women’s rights?

* See this second video on the plight of women under King Abdullah:
http://www.seneweb.com/news/Video/une-femme-decapitee-en-pleine-rue-a-la-m_n_145417.html

EVEN WESTERN NGOs GET ANNOYED!

Even Western NGOs get annoyed about tributes to the King of Saudi Arabia.
« The Saudi regime is insensitive to human rights » and Amnesty International is worried about the « most tragic » plight of blogger Raef Badawi sentenced to 1000 lashes, said on Friday to AFP Salil Shetty, the head of the NGO, the day after the death of King Abdullah of Saudi Arabia. « I do not want to speculate on what will happen politically, but from the point of view of Amnesty International, the question is the total absence of human rights in this country. That is our concern, » said Mr Shetty on the sidelines of the Davos economic Forum.

« Looks like the Saudi regime is insensitive to human rights and human dignity, and unfortunately they are also protected by many Western countries, because they have oil and because they are seen as allies in the fight against terrorism”, said Mr Shetty. « In fact, when one violates the human rights as does Saudi Arabia, one nourishes terrorism, one does not fight it. «

THE TRAGIC CASE OF RAEF BADAWI:
HE IS VISIBLY NOT « CHARLIE » FOR HOLLANDE AND COMPANY!

« The case of Raef Badawi is one of the most tragic. Nothing has changed, he will still be legally whipped every Friday. And the only reason they stop to do is to make his state of health improves in order to hurt him again », said Mr Shetty, while political and industry leaders from around the world gather this week in the comfort of the small Swiss resort and greet the Ryad autocrat described by Obama, Hollande and Lagarde of the IMF as « having advanced the rights of men and women » (sic).

« This is the form of the most terrible and medieval punishment. Saudi Arabia has also carried out public decapitations. We criticize the Islamic State (Author’s note: Daech), but there is a government that has done more than 60 decapitations in public in recent months », he accused. Saudi authorities have postponed the flogging of Raef Badawi, 31, who had been imposed last week a first set of 1,000 lashes for « insulting Islam. » Scheduled this Friday, the flogging was postponed because the wounds of the first shots have not sufficiently healed, according to his wife …

(*) HOLLANDE ONE DAY HYPOCRITE, ALWAYS HYPOCRITE …
After « I’m Charlie » Hollande has honored the memory of the godfather of Wahhabism (mother ideology of Salafism and djihadisms), he is also in Davos, the annual financial summit of the « masters of the world » …
He is the first « socialist » French president (sic – long ago that European social democracy has nothing « socialist », from the end of August 1914) to go to Davos. You remember a certain François Hollande who during the election campaign in 2012, made the finance his « adversary » (resic)? The French definitely have short memories …
__________________
http://www.scoop.it/t/pcn-spo
https://www.facebook.com/PCN.NCP.press.office