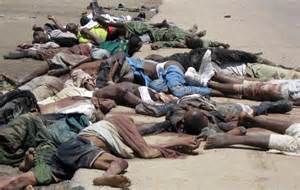 « Fighting in Syria is not Jihad. It is a form of exploitation of young people with poor living conditions (…) Syrians are Muslim and every Muslim does not fight his Muslim brother »
- Sheikh Othman Battikh, Mufti of the Republic of Tunisia.

The analytical of jihadism made in USA, that of the « war of civilizations » (a Zionist invention of Likudniks, popularized by Huntington and neocons) that Atlanticist politicians and NATO media want to impose us, is totally false and irrelevant. No, the jihadi war is not a war of Muslims against Christians or animists. It is a war against Muslims too and primarily in Africa and the Middle East!

We must end these false analyzes that lead people astray and strengthen the US-Atlanticist and Zionist propaganda. Especially since these analyzes also pollute our camp. On AFRIQUE MEDIA TV yesterday, a young panelist asserted these American theses and said that « Muslims should speak with Christians » (sic), as if the Muslims were the source of the problem. This is exactly the propaganda of the Atlanticist governments. A few weeks ago, another young panelist on the same TV used, directly from a Western book regurgitated without criticism, the same American frame of reference to explain the war in Syria. Proclaiming that it was « a conflict between the Sunni majority and Shiite and Alawite » minorities (resic). Apparently unaware that the Syrian Arab Army of Bachar al-Assad is made up of 90% Sunni and one of the main characters of the Syrian state is the Grand Mufti of the Republic, my friend Sheikh Ahmad Badr al-Din Hassoun .

We must end Western propaganda, Western academic sources, fool and unilateral respect of Western academics. Universities of the Atlanticist Bloc are primarily one of the ideological state apparatuses (following the relevant concept of Niko Poulantzas), intended to regulate ideologically the population. And researchers from these universities are the pillars of NATO propaganda media.

For the skeptics, the news shows us today in horror that Muslims are the first victims of the war of this misguided jihad.