# PCN-INFO / AS BERLIN CLAIMED TO FORGET THAT THE BUNDESREPUBLIK IS LEGALLY THE HEIR OF THE THIRD REICH AND ITS BUNDESWEHR THAT OF THE NAZI WEHRMACHT, ATHENS REMINDS IT OF IT BRUTALLY … BEFORE OTHERS? 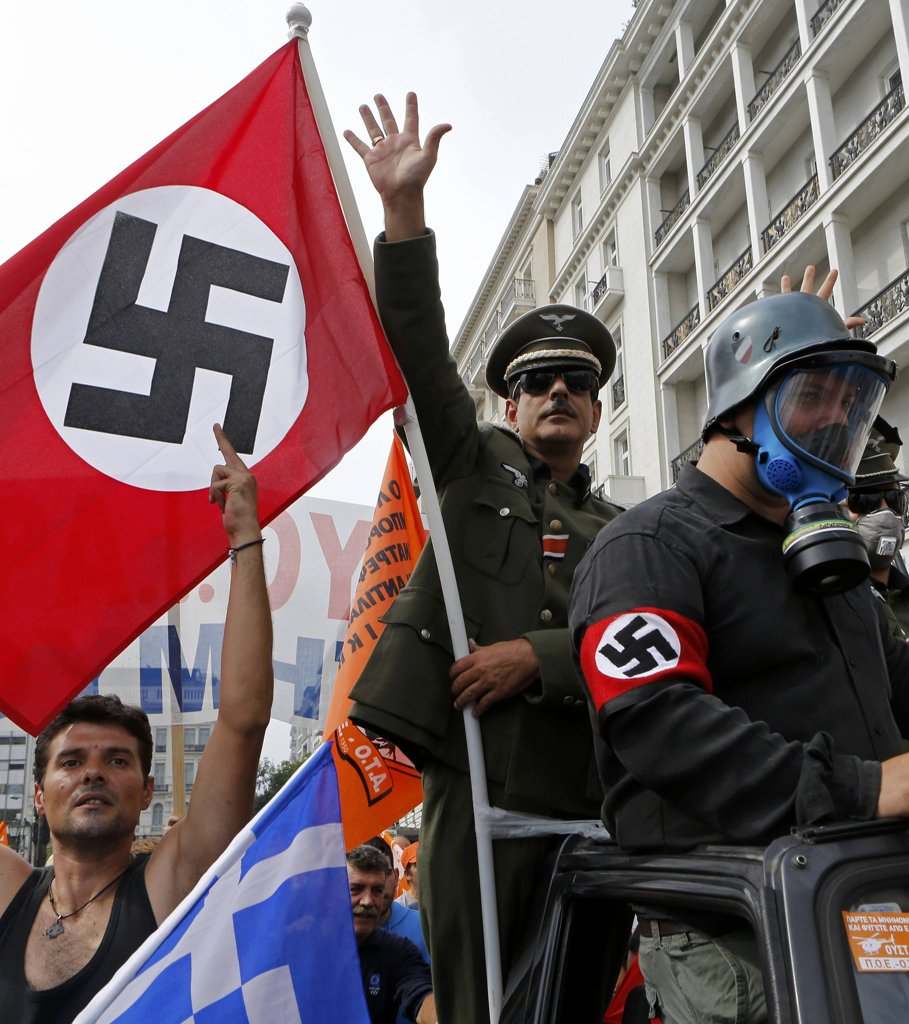 Anti-German rally of the far left wing of Syriza (a coalition for elections and not a party) in Athens.

Tsipras speaks of the « historic obligation » to demand repayment of war indemnities to Berlin! Greek Prime Minister Alexis Tsipras spoke on Sunday, of the « historical obligation » of his country to demand war reparations to Germany, a subject on which Berlin has already said « no ». « There is a moral obligation to our people, to history, to all the European peoples who fought and gave their blood against Nazism, a historical obligation » to call on Germany « war indemnities and repayment of forced loan » that the Nazis had compelled the country to, and that was never repaid, launched Mr. Tsipras.

Greece will have sooner or later to leave the Eurozone, said Sunday the former chairman of the Federal Reserve Alan Greenspan. « This is a crisis and I do not think it can be solved easily, in fact I do not think it can be resolved without an exit of Greece from the Eurozone, » said the former chairman of the US Federal Reserve (Fed) on BBC radio. « I do not think it helps them to be in the euro and I certainly do not see how it can help the rest of the Eurozone. And I think it’s just a matter of time before everyone realizes that separate is the best strategy, » he added.
The Fed chairman from 1987 to 2006 also found that the Eurozone could not continue in its present form without political integration. These comments come after an inconclusive European marathon of Greek Prime Minister Alexis Tsipras and Minister of Finance Yanis Varoufakis, after which Athens reiterated its demand for a bridging help plan for the country.
The tour ended with a finding of persistent disagreement between Athens and Berlin, which urged the Greek government to resume negotiations with the troika of creditors (EU, ECB, IMF).

« THERE SHOULD NEVER BE A FOURTH REICH »
(JEAN THIRIART)

The EU crisis is not ready to stop and Berlin will pay cash its arrogant will to power. The lessons of Bismarck, Wilhelm II and Hitler were mostly forgotten by Merkel. In the words of the great geo-politician Jean Thiriart in 1965: « There should never be a Fourth Reich. » And especially not disguised as « German-European Union », dominated from Berlin and from Frankfurt with a « euro-mark » (what is ultimately the single European currency)!