# EODE-TV / THE GREAT GAME (LE GRAND JEU). AT THE HEART OF GLOBAL GEOPOLITICS: GREATER-GERMANY BACK / PART 1. A THREAT FOR EUROPE? 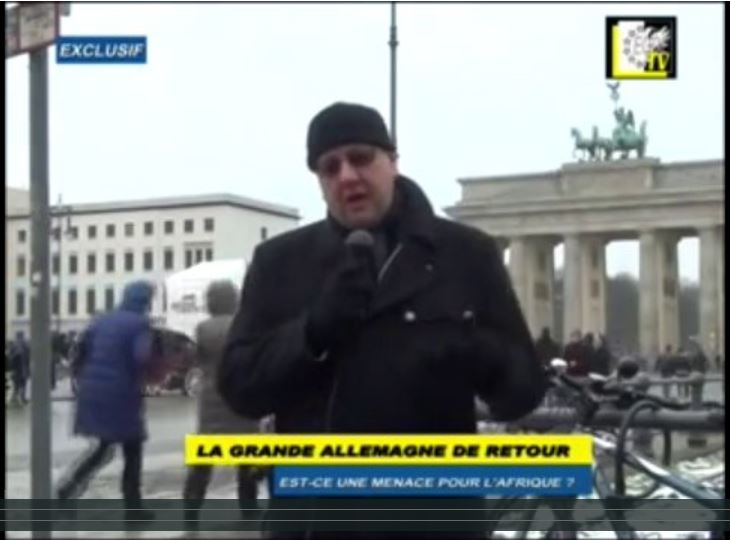 THE GREAT GAME (LE GRAND JEU). AT THE HEART OF GLOBAL GEOPOLITICS (6-1):
Greater-Germany back /
Part 1. A threat to Europe?

Welcome to this new edition of our programme: LE GRAND JEU (THE GREAT GAME). AT THE HEART OF GLOBAL GEOPOLITICS produced with Luc MICHEL, international correspondent of AFRICA MEDIA and the boss of EODE-TV, who brings his expertise to the show. And reveals the inside information of global geopolitics and ideologies that move people. With his transnational vision open on continental dimensions, geopolitician Luc MICHEL gives us the key of rival geopolitics seen from Moscow, Washington, Brussels or also from Beijing …

In this new programme, we find Luc MICHEL in Berlin, Bundestag, Brandenburg Gate, Alexander Platz, Unter der Linden, Spandau or Hotel Adlon (in the heart of the plots under the Weimar Republic) … A plunge into the heart of the political Berlin for a GREAT GAME entitled « SHOULD WE BE AFRAID OF THE RETURN OF GREATER-GERMANY?  » and that analyzes the ideological and geopolitical sources and the deployment of the new power policy of the Republic of Berlin in the European Union, Eastern and Central Europe (the « Mittel Europa »), Ukraine, Poland, Romania and Hungary, but also Africa and the Middle East. The return of Germany is at the heart of the news this week because the North American Institute STRATFOR dedicates a geopolitical analysis to « the emergence of Germany » …

The first part of our programme starts with a geopolitical thinking on the emergence and future of the new Greater-Germany, and then will lead us to Central Europe …

We find Luc MICHEL at Alexander Platz, the former heart of the DDR that became the center of reunified Berlin, where still stands the former tower of the East German Television, ghost of a lost state, for a first analysis.

He answers the following questions:
Reflection on the place of a Greater-Germany in Europe and the world should not be new, although Berlin is back as aggressive power in early 2015?
The annexation of DDR to the Bonn Republic is thus what reanimates Greater Germany?
The current crisis of the European Union explained by German power?
How it all going to end? Can we make projections?
Apart from economic surveys, are there geopolitical analyses about the becoming of this new Greater-Germany?

In a second analysis, we find Luc MICHEL at the Brandenburg Gate, next to the Grand Hotel Adlon, once the heart of the plots under the Weimar Republic. The former checkpoint of the Cold War, which divided the two Germanys is today facing the Bundestag and opening Unter der Linden, « Berlin’s Champs Elysées », the heart of this Greater-Germany in 2015, as it was before 1945 …

He answers the following questions:
For your second analysis, tell us about the direct influence of Berlin over its neighbors, this « Mittel-Europa »?
And Ukraine in all this? One sees there an aggressive German diplomacy, especially in supporting the Euro-Maidan, then after the pro-Western coup of 21 February 2014, in supporting the junta of Kiev and the Poroshenko regime? And
German ethnic minorities in Europe. What roles do they play in the Berlin power policy?
Berlin, it is also a great influence in the European Union. What role does Merkel play today in this union in political, economic and financial crisis?

Visuals:
* This is first Polish Prime Minister Donald Tusk with Merkel.
* Another success of Merkel’s policy. This is Klitschko, the new mayor of Kiev. But also a direct member of the CDU-CSU party of Merkel. The Chancellor wanted to even make him the President of Ukraine. The US preferred to him Poroshenko …
* Finally, Merkel has directly supported an ethnic German, Klaus Iohannis, mayor of Sibiu, a city founded by Germans in Romania, as President of Romania. Iohannis, he, in this video, poses Merkel as European leader of the continent …

III – MERKEL AND THE RAMPANT ‘COLOUR REVOLUTION’ IN BUDAPEST

Luc MICHEL analyzes the rampant « colour revolution » against Viktor Orban in Budapest:
And Hungary? Merkel has just visited Budapest and visibly it did not go well?

Visuals:
* The « rampant colour revolution in Hungary. » Note in the riot scenes false Soviet style flags with the profiles of Putin and Orban (2 January 2015) …
* Budapest – Merkel expected as the messiah by anti-Orban demonstrators proclaiming « Merkel save us » (1 February 2015).

Here we are at the end of the first part of our programme on the return of Greater-Germany.
A special thank you to Jan Vanzeeboroeck, editor of EODE PRESS OFFICE and correspondent of AFRICA MEDIA in Ghent (Flemish Belgium), who ensured the sharp documentary research of many visual elements in this programme.
Join us on AFRICA MEDIA and EODE-TV, the Eurasia-Africa Axis of Media, for the second part of our show on the GREAT GAME (LE GRAND JEU) on THE RETURN OF GREATER-GERMANY, leading you to Berlin, but also to Africa …

Follows in:
LE GRAND JEU (THE GREAT GAME). AT THE HEART OF GLOBAL GEOPOLITICS:
Greater-Germany back /
Part 2. A threat to Africa?

Join us on Facebook
with the « Official Group AFRICA MEDIA TV »: https://www.facebook.com/groups/afrique.media.groupe.officiel/