# LUCMICHEL.NET / RED ALERT / DEBALTSEVE: GAME OVER FOR A QUARTER OF THE UKRAINIAN ARMY! 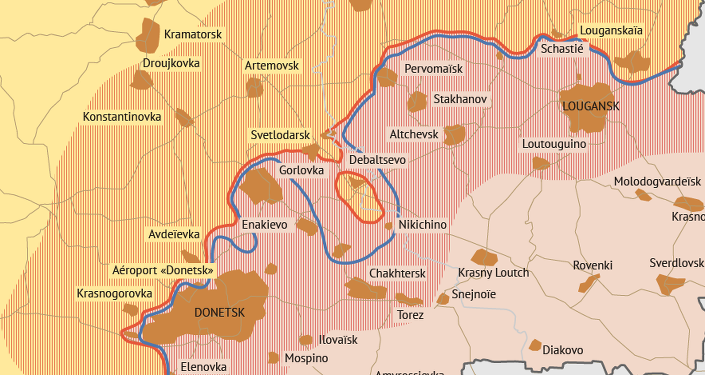 Donetsk Republic on Saturday warned that “any attempts by Kiev forces to move out of the battleground town Debaltseve after the start of a ceasefire would be considered an aggression”.

Fierce fighting raged around Debaltseve on Saturday in the hours before the 2200 GMT start of a truce intended to be a first step in a peace plan to end 10 months of conflict.
Kiev desesperatly denies DNR claims that thousands of government troops have been trapped in the town. But the game is really over for a quarter of the Ukrainian Army, with huge quantities of materials, including tanks, armored vehicles and heavy artillery!

Donetsk leader President of DNR Alexander Zakharchenko on this Saturday warned that “any attempt by Ukraine to move its troops out of Debaltseve after the ceasefire would be seen as a violation of the truce”. « These attempts will be stopped by us and the enemy will be destroyed, » Zakharchenko said.

“Ukraine and the West accused Russia of piling in heavy weapons to spearhead the frantic separatist onslaught for the vital position. The threat highlights the fragility of the looming truce, and could be used by the separatists to justify a return to fighting”, said AFP.

Kremlin spokesman Dmitry Peskov echoed the rebel warning.
« Ukrainian army units that are surrounded even after the start of the ceasefire will naturally try to break out and thus break the truce regime, » Peskov was quoted as saying by Russian news agency Interfax. « There is a potential for such a danger. »