# EODE-TV / THE GREAT GAME (LE GRAND JEU). AT THE HEART OF GLOBAL GEOPOLITICS: GREATER-GERMANY BACK / PART 2. A THREAT ON AFRICA?

THE GREAT GAME (LE GRAND JEU). AT THE HEART OF GLOBAL GEOPOLITICS (6-2):
Greater Germany back /
Part 2: A threat on Africa?

Welcome to the second part of our program of the GREAT GAME (LE GRAND JEU) entitled « SHOULD WE FEAR THE RETURN OF GREATER GERMANY? ». We find Luc MICHEL in Berlin, who specifically analyzes THE RETURN OF BERLIN IN AFRICA, and its historical and geopolitical roots, when Merkel deploys the new power policy of the Republic of Berlin. The return of Germany is at the heart of the news this week because the North American Institute STRATFOR dedicates a geopolitical analysis to « the emergence of Germany »…
Should we be afraid of Berlin in Africa?
Is there a new German threat on Africa?
These are the questions that our expert, geopolitician and Pan-Africanist Luc MICHEL, will answer …

* Analysis 1:
We find Luc MICHEL for this analysis at the Bundestag in Berlin, still braving freezing cold by minus 8°C, to offer us as usual beautiful pictures …
The Bundestag, the German parliament burned by the Nazis in 1933 and left in ruins by the Soviets after 1945. Its spectacular reconstruction symbolizes the return of German power after the annexation of the DDR.

He answers the following questions:
Luc MICHEL in several editorials you analyze the return of Berlin in the Eurasian politics, but also African, as a great aggressive power. The presence of Germany in the recent summit in Niamey, devoted to the so-called « war on terror », has surprised many Africans. Can you summarize the threat posed by the return of the Greater Germany of Merkel in Africa?
You mention the Nazi Third Reich, which develops large German projects for Africa?
We return to Luc MICHEL for the rest of his analysis on the return of Germany in Africa. Does something remain today of these Nazi plans?
Do some 1934-1944 projects visibly inspire the new African policy of Berlin?
German colonialism has yet left very bad memories in Africa?
What precisely are the current plans of Berlin for Africa? Have they been clearly and publicly exposed?
Berlin also intends to « promote human rights » in Africa?
And the German military presence in Africa? What is it? Where is the Bundeswehr deployed?

Luc MICHEL answers the following questions:
The dominant power in Europe and Africa, the hyper-power, is the USA. Why does it let grow these aggressive nostalgia of former great powers like Germany?
And Africa? Why the US clearly favour the return of Greater Germany in Africa?

Excerpts:
* The presence of BUNDESWEHR in Africa. Here in Mali, with EUFOR and MINUSMA « Gefährliche Mission – Bundeswehreinsatz in Mali Politik direkt »

* The presentation of the book THE AFRICA REICH by Guy Saville, which Luc MICHEL is talking about. The maps in particular speak for themselves …

* German Foreign Minister Steinmeier, behind the return of Berlin in Africa, here in Morocco …

* Obama and Merkel in Baden-Baden

Here we are at the end of the second part of our program on the return of Greater Germany.
A special thank you to Jan Vanzeebroeck, editor of EODE PRESS OFFICE and correspondent of AFRICA MEDIA in Ghent (Flemish Belgium), who ensured the sharp documentary research of many visual elements in this programme.
See you soon on AFRIQUE MEDIA and EODE-TV, the Eurasia-Africa Axis of media, for a new show of LE GRAND JEU, which will lead you again to the heart of global Geopolitics …
________________________
The first part in:
THE GREAT GAME (LE GRAND JEU). AT THE HEART OF GLOBAL GEOPOLITICS: Greater Germany back / Part 1. A threat for Europe?

Join us on Facebook
with the « Official Group AFRICA MEDIA TV »: https://www.facebook.com/groups/afrique.media.groupe.officiel
EODE-TV on Vimeo:
https://vimeo.com/eodetv 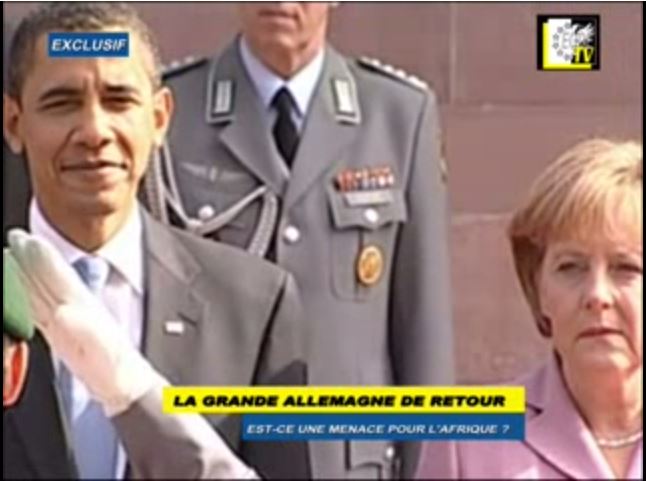