# LUC MICHEL: INTERVIEW FOR ‘SPUTNIK INTERNATIONAL’ ON THE RISE OF POPULIST PARTIES IN THE EUROPEAN UNION 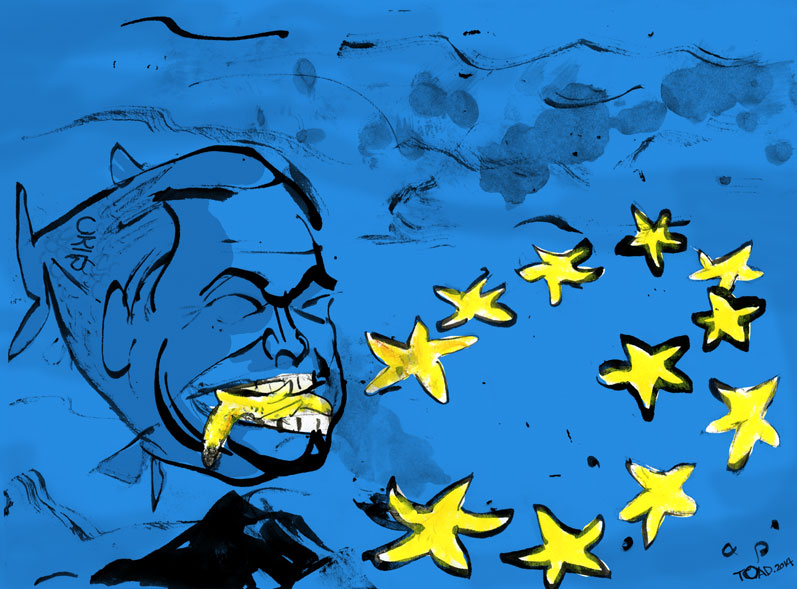 * Alex Mosesov / Sputnik News Agency: Sputnik has conducted an opinion poll on political parties in Europe and particularly the rise of such parties as UKIP, Podemos and Front National. We found out that Europeans attribute the rise of this parties to high level of immigration and disenchantment in the European Union project. Could you please comment on these findings?
Asked what are the reasons for the rise of right wing parties, such as UKIP, Podemos and the Front National, most Europeans cited three reasons – high level of immigration (47%), promises that were never fulfilled (46%) and disenchantment in the EU (38%).

Luc MICHEL: It’s a first thing to say; that the qualification inside the category of “populist movement” it’s a qualification of Western System. Inside they have included very different political forces, mainly in the way to discredite them. There are conservative right parties, left populist movements and of course far-right parties (in the ideological perspectivce of fascism and neo-fascism). In these countries the political position of these populist forces, but also of their places in the national political game, depends not only of the history of each country but also of the history itself of each movement. In this history the relation of the historical conscience of the people to the memory of the German occupation and fascism is different.
The question of immigration or the social crissis are only symptoms of a more deep and fundamental crisis: the crisis of the Western European states. A European state which is more and more weak in confrontation with the Western liberal globalisation. This state does not work with efficiency and does not meet its historical, political and social requirement. Inside this is also the crisis of the Western parliamentarism, which is no more a “democracry” but an oligarchy with a leading class (politics, finances, media and show-business) deeply separated from the people. What explains the aspiration of a more and more important part of population for other and more real form of democracry (such as Direct democracry, Participative democracry and so on).

* Alex Mosesov / Sputnik News Agency: In the UK, 67% of those polled cited immigration levels. – Do you agree that this is the main reason for the rise of right political parties in the country?

Luc MICHEL: In the UK it is a rise not of a far-right party, but of a conservative force : UKIP, which has no ideological base in common with the French National Front. Ideological clones of the French FN, such as the BNP (British National Party), never succeeded to raise electoraly.
UKIP is also an opposition to the British System which takes inscription in various independantist movements, not only the powerful major SNP in Scotland (a left-wing party). But also in other independantist movements (for example in Wales).
UKIP, which is the major opponent to the British system, can show the best and the worst. Its positions in foreign policy are in opposition to the Western system: friendship with Putin’s Russia, support to Baathist Syria, refusal of NATO military expeditions. For example UKIP supports the Russian position in the Crimean issue with a spectacular public campaign. Besides that UKIP is surfing on the immigration issue, but in the UK it is mainly focused on internal EU immigration, with shamefull campaigns against Romanian, Bulgarian and Polish people.
But the center of the political attraction of the people for UKIP is the complete failure of the British classical political parties.

* Alex Mosesov / Sputnik News Agency: disenchantment in the EU. What particularly do you think are they disenchanted

Luc MICHEL: It is not for me a disenchantment for the EU but a failure of the (Western) European idea. This idea was betrayed by the Western European politicians. Their submission to NATO and the USA impeached completely the uprise in the 90’s of a “Superpower Europe”, a transnational state with money, governement and army. NATO is there to impeach completely this European army (which is the essential condition for a European state). The EU, and before the EEC, was built on the idea of peace between European peoples (no more war after two world wars) and progress and justice. The imposition by the Western system of the liberal ideology destroys progressively the idea of social progress and justice. For the moment the TATFA issue (Transatlantic Treaty between UE and USA) demonstrates the hiatus between liberalism and Western “European social state”. NATO with its various military agressions, and its unlimited creation of zones of tension, has closed the idea of peace between Europeans. The bombing of Belgrade in 1999, the first bombing of a European capital since 1945, was the consecration of the European failure. Since that the European idea is in agony.
That explains also the deep fear inside the politicians of Brussels for the “Second Europe” that president Putin is building with the Eurasian integration, which is another (Greater) European ideology, an alternative to unite the continent, and all of this is not bearable by the Western European political class.

* Alex Mosesov / Sputnik News Agency: 44% of the Spaniards and the French cite economic failures. Do you think that Podemos and the Front National can offer a better alternative?

Luc MICHEL: I think absolutely not! National Front is a part of the French oligarchy, despite all its pretentions to be an alternative. Since its creation in the begining of the ’70, the FN is permanently instrumentalisated both by the French classical Right and by the Social-Democracy. All the French presidents played on this. President Mitterand especially supported and organised the raise of Le Pen in the 80s, giving him access to the State Mass medias and financing the FN on the hidden budget of the French presidency (the famous “special funds”). The Le Pen family, a family of millionaires, who make fortune with and by the politics is a representative of the French oligarchy and not of the people. On this you add nepotism and clanic direction of the party. This week there is a big debate in France because the FN number 2 Philippot has chosen for lawyer Goldanel, one of the main representative leader, not only of the Atlanticist neocon lobby in France, but also of the pro Israelian lobby in France (the CRIF, equivalent of the US AIPAC, close to the Israeli Likud). Revealing the close links between these lobies and Marine Le Pen.
In Spain Podemos also cannot offer an alternative. See Syriza failure in Greece, on the Left. My opinion is that there is no escape inside the Western parliamentarist system. It is also the opinion of more and more European citizens, who simply refuse all participation to this system. In France the first party its not the FN but the “party of abstentionists”. In the last European elections (may 2014), as for the late Departamental elections (a kind of regional election) 60 percent of French people don’t go to vote. If you take these 60 percent outside the vote (really expressed votes), FN has less than 10 % and the PS of President Hollande has less than 7 %. This situation exists in other European countries, for example 70 % of the Czech people didn’t go to vote in the European elections in 2014. That explains why democratic alternatives such as Direct democracry, referendum, Participative democracry and so on meet a great interest in Western Europe.

* Alex Mosesov / Sputnik News Agency: In Spain, though, far fewer people think immigration is the reason for (10%) or disenchantment in the EU (16%). The main reason for them (cited by 49%) is the need of social reforms. Why do you think the reasons for Spain are so different than for France and the UK?

Luc MICHEL: The answer is very simple because it is a complete historical situation in Spain. From 1936 to the begining of the 80s, Spain was a fascist dictatorship (the Iron Rule of Franco), arrived in power with the help of Hitler and Mussolini in a bloody civil war. There is no place in the Spanish political space for a party like FN. Not only because a big part of the Spanish people refuse all neo-fascist ideologies, but also because the Spanish Right, the one of the radical conservative Popular Party of Aznar, occupies the political space that is left to the radical right in other countries like France. Also the traditional contestation of the system is lead by left parties, that explains the success of the left populist new parties in the Spanish municipal elections a few days ago. You can’t avoid the weight of the historical popular memory and its relation with fascism, German nazi occupation, collaboration and this sort of topics.