# EODE/ GEOPOLITICS/ LESS US DOMINATION IN THE WORLD WITH TRUMP? TRUMP IS ALREADY FLIRTING WITH THE US LOBBY OF WEAPONS INDUSTRIES TO REINFORCE US NAVY! 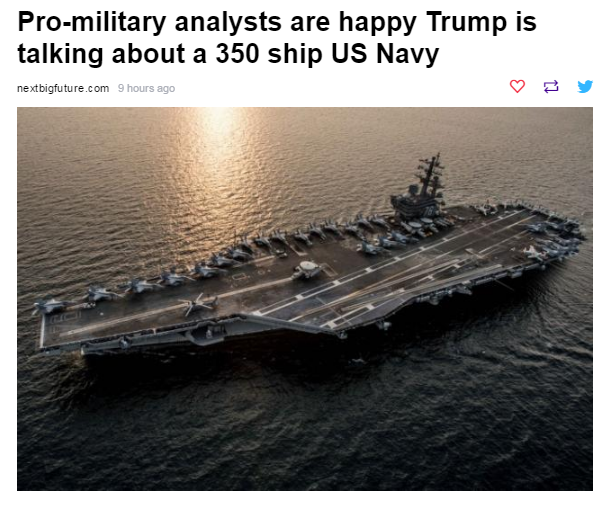 Pro-military analysts are happy Trump is talking about a 350 ship US Navy!

The US Navy loves to have lots of ships. President elect Trump received kudos for promising a 350 ship navy. This would be up from the 271 ships that are in the current fleet. A certain piece of Ronald Reagan’s military buildup was the promise of a 600 ship navy. This was an increase from about 530 ships at the end of Carter’s administration. This went down further to 521 ships in 1981 before reaching a peak of 594 ships in 1987. The world war 2 peak was 6768 ships. There were about 2500 Amphibious landing ships to achieve actions like the D-Day invasion. There was a peak of 833 major surface ships. 377 Destroyers. 361 Frigates. 28 aircraft carriers. 23 Battleships. 232 submarines …

Military Analyst Jerry Hendrix is happy and believes most of the US Navy’s problems will be solved with more ships and budget :

“The last time the US Navy had 350 ships in its inventory was in early 1998, at which time it had twelve carriers, 30 cruisers, 53 destroyers, 40 frigates and 70 fast attack submarines. Five years later the Navy crashed through the 300 ship mark on its way to the 272 ships it has today, which includes 10 carriers, 22 cruisers, 62 destroyers, no frigates and 54 fast attack submarines. Much of this decline has been driven by the fact that individual ship costs have gone up owing to new advanced technologies while the Navy’s ship construction spending account has remained flat, driving the number of ships that can be purchased downward.

The Navy’s budget today should be around $190 billion per year according to the last threat-based budget proposed by then Secretary of Defense Robert Gates in 2011, but instead it struggles with a $155 billion budget imposed by the administration he left in disappointment.”