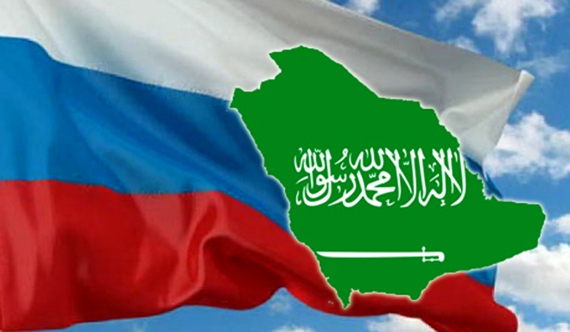 “Putin Is The New Lord Of The Middle East” …

“The Saudi royal visit to Russia concluded on October 8. One of King Salman’s main goals during his visit to Moscow was to convince Russia not to place « all its cards in the region on Iran. » On October 5, 2017, Saudi King Salman met with Russian President Vladimir Putin.On that occasion, the Saudi monarch stressed the importance of stability in the Persian Gulf as an essential pre-requisite for achieving security and stability in the world. King Salman added: « This requires that Iran abandon attempts to interfere in the domestic affairs of the states in the region and stop the activity that destabilizes the region. »

On October 6, during his meeting with Russian PM Dmitry Medvedev, King Salman reiterated his position towards Iran. The Saudi monarch told Medvedev: « [Earlier with the Russian President] we also discussed the necessity to reach peace and stability in the Middle East region. In order to do that, Iran has to stop its policy, maintain good neighborly relations and respect international legality. »

The royal visit was also an opportunity for Saudi and Russian companies to sign business deals. Nezavisimaya Gazeta reported that over a dozen deals were signed, in the fields of defense, communications, space, trade and investment.

As for defense, Saudi Arabia signed a preliminary agreement to buy S-400 air defense systems. The Saudi Press Agency also specified that the Saudi Ministry of Defense signed with Russia contracts for the supply of S-400, Kornet-EM systems, TOS-1A missiles, AGS-30 bombers, Kalashnikov AK-103 assault rifles and their ammunition. It is worth noting that immediately following the S-400 deal, the U.S. government approved the sale to Saudi Arabia of the advanced Terminal High Altitude Area Defense (THAAD) missile defense system for $15 billion.”

* However, following the news of the S-400 deal, RIA news agency published a comment expressing reservations about a possible sale to Saudi Arabia:

Document 2/ “An unidentified expert from the Center for Analysis of Word’s Arms Trade was quoted, as saying: « Moscow should approach this issue with healthy pragmatism– if Riyadh really wants to purchase those systems [S-400], then let’s stamp the agreement with 100% payment in advance and only then they will stand in a line for delivery after we supply the systems to China, Turkey and, as expected, India. »

The expert recalled that Russia already had a negative experience of military cooperation with Saudi Arabia. He stated that in the past Saudi Arabia made preliminary agreements to purchase Russian weapons, but the whole thing ended up in nothing concrete. The expert said that the Saudis actually promised to purchase weapons if Russia renounced its intention to supply S-300 systems to Iran. It should be noted that Iran’s Revolutionary Guard Corps recently displayed the S-300 in Tehran on September 24, 2017. The expert then added: « If in fact there are signed agreements regarding building the nuclear plant in Saudi Arabia and there are [Saudi] investments in exploring and producing oil and gas in the Arctic shelf, then the S-400 contract will be a great supplement to this package. »

During his stay, King Salman also met with the presidents of the predominantly Muslim republics of Chechnya, Ingushetia, and Tatarstan in Moscow. Saudi Arabia sees itself as the leader of the Sunni world, whereas the Russian hosts may see the meeting as conferring Muslim religious legitimacy upon Moscow.”

“Saudi Arabia Reached The Conclusion That The U.S. Is No Longer Able To Protect The Kingdom”

RIA news agency columnist Gevorg Mirzayan penned an article, titled « The Visit To The New Lord Of The Middle East: The Saudi King In Moscow. » In the article, Mirzayan stated:

Document 3/ « Despite the fact that the two sides for a long time were considered to be adversaries, Moscow’s and Saudi’s comments regarding their intention to strengthen their mutual relations prove that both sides decided to leave the emotions behind…

« Part of the Saudi leadership began to endorse the conclusion that the U.S. is no longer able to fulfill the Quincy Pact (struck in 1945 between [President] Roosevelt and the first King of Saudi Arabia Abdulaziz) and protect the Kingdom of the Two Holy [Cities]. For that reason, Ryiadh, according to Prince Mohammad Bin-Salman, would like to hedge the risks….

(…) The Russian national interest implies creation of balance of interests in the region – only then no power will contemplate ejecting Moscow from the region, but [instead] there will be an attempt to seek Russian support to shift the balance in its favor. »