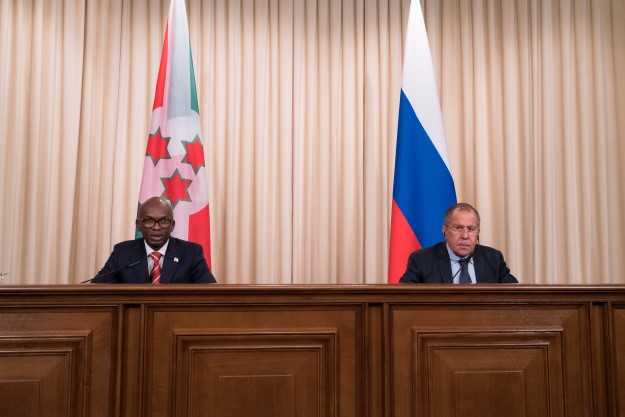 We had very good and productive talks.

We pointed to the strengthening of relations between the Russian Federation and the Republic of Burundi in all areas.

We reaffirmed our resolve to continue to promote our political dialogue, to build up our trade, economic and investment cooperation and cultural exchanges, together with improving the legal framework of our relations.

We highly assessed the efforts to prepare a number of joint investment and economic projects. We continue preparations for the implementation of several mutually beneficial projects in industry, mining and banking. We have agreed to help our business communities to develop direct contacts, including by using such venues as the St Petersburg International Economic Forum (SPIEF). A delegation led by Burundi’s Second Vice-President Joseph Butore took part in two forums. This year, Second Vice-President Joseph Butore travelled not only to St Petersburg but also to Mordovia and Tatarstan. Companies from these Russian regions are actively working with their Burundian partners and have created several interesting joint ventures.

We have a positive view on our military and technical cooperation, which has a good history. We are discussing possible measures to develop this cooperation further. I would like to point out that some of the Russian universities train personnel for the Burundian army, police and security services.

At the same time, we also train civilian professionals for Burundi. Over the whole period of our cooperation, 4,500 Burundians received university education at the Soviet Union and then Russia. Over the past two years, we increased the education quota for our Burundian friends so now we allocate 40 scholarships to them. By the way, in a few days from now, 12 Burundian diplomats will come to Moscow for two weeks of onsite training at the Foreign Ministry’s Diplomatic Academy. It is a relatively new practice for us, but we will develop it not only in relations with Burundi and other African countries, but also with our partners from other parts of the world.

Minister of External Relations and International Cooperation Alain Aime Nyamitwe updated us on the efforts they are taking to settle domestic problems through a constructive dialogue involving all political forces. We wholeheartedly support this position. We are ready to provide assistance in order to contribute to the efforts that are being taken by the international community towards this end, including at the UN, the African Union as well as the East African Community.

We also discussed other important issues of the regional and international agenda. We see eye to eye on the need to build state-to-state communication strictly on the basis of the UN Charter. We are also in favour of all international players taking into account the cultural and civilisational diversity of the modern world, so that everyone respects peoples’ right to determine their own future.

We are very closely cooperating in the UN. We are grateful to Burundi for its continued support of Russian initiatives, understanding and taking into account Russia’s approaches and positions in its practical actions. We touched upon the UN reform. Discussions on this topic continue. Our main position is that underrepresentation of developing countries is the key problem. We want any expansion of the UN Security Council first to take into account the need to replenish its ranks with the countries of Asia, Africa and Latin America.

Our friends and colleagues made a very detailed review of the state of affairs in the hot spots and in the whole on the African continent. Particular focus was on the situation in the Democratic Republic of the Congo and in the Great Lakes region, the Central African Republic, South Sudan, Somalia, and other countries. We believe that resolving the problems facing the continent calls for an integrated approach, which implies coordinated actions of the Africans themselves with the support of the international community.

We also noted that Burundi is actively participating with its peacekeeping contingents in a number of peacekeeping operations on the African continent.

Russia, for its part, confirmed its willingness to continue to contribute to consolidating stability and security on the African continent, including in its capacity as a permanent member of the UN Security Council, and as a participant in the groups to support efforts to normalise the situation in the CAR, in the Great Lakes region.

We paid particular attention to the need to scale up joint work to combat international terrorism. We support our African friends in the efforts that the countries of the continent are undertaking to combat groups, such as Al-Shabab or Boko Haram, as part of activities of the so-called Group of Five Sahel States. These actions are in line with the initiative put forward by President Vladimir Putin on forming a broad anti-terrorist front.

Question: According to the US administration, the United States will withdraw from the Joint Comprehensive Plan of Action literally in the next few days. What steps is Russia planning to take in this case? Will Moscow encourage Tehran not to withdraw from the agreement in response to such actions by Washington?

Sergey Lavrov: As you may be aware, the Joint Comprehensive Plan of Action for resolving the Iranian nuclear issue is a massive package of documents (I believe, it’s close to 100 pages), which outlines in detail all aspects of this agreement, including specific mechanisms for considering any claims that one party to this Plan of Action may have against another party. Moreover, the entire package has been approved by a binding UN Security Council resolution.

Frankly, I’m not sure what the Americans are going to say in the coming days (we heard them promise to do so in the near future). However, given the status of this agreement, including the decision to approve it by the supreme body responsible for security measures in the modern world, it is difficult for me to imagine how it is possible to legally withdraw from an agreement that is a product of collective work recognised by everyone as a binding international legal act.

So let’s wait and see what they will say. After that, it will be possible to speak in more concrete terms on this topic. However, I can assure you that all other participants in the 6+1 agreement (the P5+1 plus Iran) have already stated publicly that they insist on its full implementation. Let’s see what happens and what specific announcement will be made. Thank you.

Question: The Russian military have repeatedly talked about signs of possible cooperation between the US military in Syria and ISIS. In addition, recently there has been a large gathering of people around the US military base in the town of Tanf. Have you received any clarifications on this from Washington? How can the silence of the Americans on this issue affect the political process of settling the Syrian conflict?

Sergey Lavrov: Indeed, the facts that the Russian military have at their disposal as part of the work of the Russian Aerospace Forces in Syria make one wonder. There are questions concerning the actions of the US-led coalition in the context of fighting ISIS outside ​​Tanf. In this region, the Americans and the coalition they lead have unilaterally declared a so-called deconfliction zone without agreeing it with anyone. Strange things are taking place there. ISIS fighters unexpectedly come out of there in large numbers. The same thing is happening on the border between Iraq and Syria. ISIS militants are flowing in from Iraq. They are trying to obstruct the offensive of the Syrian army on the eastern bank of the Euphrates River supported by the Russian military. We regularly pose these questions using our military channels. This is the main channel for clarifying all doubts and suspicions. I hope that the military being no-nonsense people will receive from their American partners specific answers to their specific questions.

In turn, I posed this question to US Secretary of State Rex Tillerson during my recent contact with him. Our most recent telephone conversation took place on October 9. He once again assured me that the only goal of the US-led coalition in Syria is to fight ISIS, and nothing else. If so, it won’t be difficult to dispel the doubts that arose among the Russian military. To reiterate, I hope that specific answers to specific questions will be provided in a professional manner.