# LUC MICHEL’S GEOPOLITICAL DAILY/ THE NEW U.S. NATIONAL SECURITY STRATEGY (I): THE RUSSIAN REACTIONS AND THE BANKRUPTCY OF CONSERVATIVE FRENCH INTELLECTUALS OR RUSSIAN ON THE ANALYSIS OF THE TRUMP REGIME 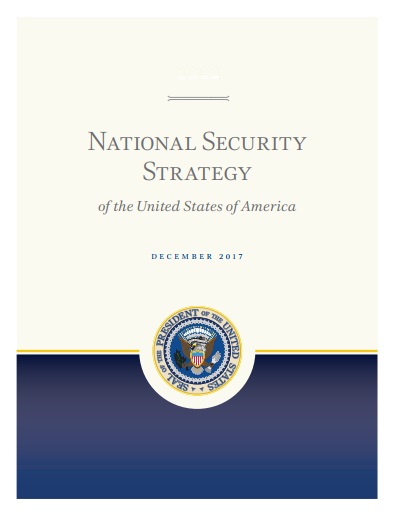 « However, without sustained, sufficient, and predictable funding, I assess that within 5 years we will lose our ability to project power; the basis of how we defend the homeland, advance U.S. interests, and meet our alliance commitments”

- was the Chairman of the Joint Chiefs of Staff Joe Dunford.

On December 18, 2017, the new National Security Strategy (NSS) of the United States was unveiled (1). According to the new U.S. strategy, “Russia and China seek to challenge American power, » and « attempt to erode American security and prosperity”. Commenting on the U.S. security strategy, Russian Presidential Spokesman Dmitry Peskov said that “the imperial nature of this document, as well as its unwillingness to abandon the unipolar world idea and accept a multipolar world,” are clearly visible.

THE NEW U.S. NATIONAL SECURITY STRATEGY  OF TRUMP IS THE BANKRUPTCY OF CONSERVATIVE FRENCH INTELLECTUALS OR RUSSIAN ON THE ANALYSIS OF THE TRUMP REGIME

It should be noted that the new US strategy of the Trump administration confirms my analyzes as early as December 2016 (2) on what Trump’s international policy would be and that it would continue the traditional American geopolitics.

Far from being a candidate “outside the US system” (or a maverick), Trump is the choice of the most radical military-industrial factions of it. Those who want a « 21st century American ». We note the bankruptcy of conservative French intellectuals (including coplot theorists) or Russian on the analysis of the Trump regime. Absolute bankruptcy on a « Conservative Trump close to other conservatives – they say – like Erdogan or Putin.” Where do ideological illusions stamped with emotion radically oppose geopolitical analysis! (3)

WHAT ARE OFFICIAL REACTIONS TO THE NEW U.S. NATIONAL SECURITY STRATEGY:

* Former Ambassador To The U.S. Kislyak:

« The mere personality of Donald Trump has apparently had a certain impact on the revised U.S. national security policy. This strategy, overall, has become more definite, tough and aggressive. Unfortunately, in our modern-day world, only force, smart force, is able to counter aggression. Thus, I think Russia’s response to it will be within this very pattern. »

* Russian Senator Viktor Bondarev, former Commander of the Russian Aerospace Forces and Head of the Federation Council Committee on Defense and Security Committee, said that Russians should view the American document as a « compliment »:

« Recognizing [Russia] as a threat to U.S. national security means that [Washington] recognize our strength and our advantage, and not just parity. Otherwise, knowing the American character, we should not have expected a ‘readiness for cooperation’ declared in the document. »

“THE U.S. INTENDS TO REVERSE THESE CHANGES BY BRINGING BACK A RECENT VERSION OF PAX AMERICANA AS A JUST WORLD ORDER”

“Better Trump’s Security Strategy Is Dangerous, But Better Than Obama’s Classification Of Global Threats” (…) « The strategy of U.S. national security made public today is worth close scrutiny at least for one reason – it is intended to create some logic in the Trump administration’s foreign policy, a logic hitherto unnoticeable. The tone of the document leaves no doubt that the U.S. is dissatisfied with the changes, which took place in the world in recent years, and that the U.S. intends to reverse these changes by bringing back a recent version of Pax Americana as a just world order. They called those questioning it [the U.S.-led world order) 'revisionists' –in the spirit of Marxist-Leninist classics. This honorable category includes Russia and China. Compared to Obama's classification, this is definitely a progress, since Trump's predecessor included Russia in the main threats list along with ISIS and Ebola (if someone still recalls this global threat).

Accusations against Russia that it supposedly creates an "unstable borderline" in Euro-Asia were to be expected.'American stability' means U.S. control over internal and external policy of other countries. 'Dictatorship' [exercised] by U.S. embassie (…) The U.S. is clearly betting on power in all spheres – including economy and defense, and America First will mean ‘America is stronger than everyone, thus it is right’. Let me quote Pentagon Chief Mattis: « … and if we do not take decisive steps today, then very soon –perhaps within five years – Washington may lose its capability to project its might unrestricted in critically important areas for us and our allies. (…) (Just) like that. UNHINDERED Those undermining this capability are revisionists. This is the origin of the current strategy.

During the Cold War the sides feared one another because of the mutual attempts to UPSET the balance of power in their own favor. Now the world has turned upside down – the Americans perceive Russian attempts it attempt to RESTORE a balance, previously upset by the U.S. in their favor, as revisionist. This is what makes the Americans and their new national security doctrine so dangerous. »

« The U.S. National Security Strategy is aimed exclusively at reviving the American hegemony and building a unipolar world. Essentially, this is a continuation of the previous Obama administration policy aimed at demonizing Russia internationally. »

« The U.S. national security strategy presented by Donald Trump differs little from the previous ones drafted by the Obama administration. Unfortunately, the U.S. did not show its readiness for an equal dialogue, and wants to speak to the whole world from a position of armed strength. » Zheleznyak then added: « The proclaimed course of the national security strategy demonstrates the weakness of the U.S. foreign policy and Washington’s loss of international authority, which the White House attempts to maintain by the familiar means of exerting pressure and growing military expenditures. The U.S. intends to keep dragging its partners into an arms race through an irresponsible NATO eastward expansion, stoking and kindling new fears of a non-existent Russian aggression and making up fables regarding a cyber-threat stemming from our country. »

‘THE NEW STRATEGY DOES NOT CHANGE ANYTHING (RUSSIA’S MFA)

* The Russian FM reacted as follows:

‘The New Strategy Does Not Change Anything. All It Does Is Openly State Where The United States Is Heading, Reflecting Washington’s Growing Incertitude In Its Standing (…)

It was with regret that the [Russian] Foreign Ministry discovered the confrontational nature of the new National Security Strategy of the United States, unveiled on December 18. It is based on a vision that depicts the world from a position of strength and leads to adversity instead of promoting constructive and equal cooperation with other countries working together to resolve the existing challenges. Instead of seeking to promote partnerships, this document reveals the ambition to preserve at any cost the much weakened U.S. dominance on the international stage.

Hence the anti-Russia proclamations scattered all over the text. The fact that Russia, as well as China, strengthened their economic and military might, is presented as a challenge for the United States. In other words, Washington clearly does not want our countries to become major powers, fearing to lose the dominant status it once enjoyed. It is for this reason that Russia is accused of threatening the world order, which in this case apparently stands for the unipolar world structured around the interests and needs of the United States.

The program acknowledges the ‘central role of power in international politics.’ The United States has long been guided in its policy choices by this vision. The new strategy does not change anything. All it does is openly state where the United States is heading, reflecting Washington’s growing incertitude in its standing.

As far as Russia is concerned, we reaffirm our readiness to promote partnership ties with the United States free from any attempts to impose anything or interfere in our domestic affairs. A genuine and effective partnership is possible only when based on the principles of equality and mutual respect. »

“PEACE THROUGH STRENGTH IS THE CREDO OF THE NEW U.S. SECURITY STRATEGY”

* Fyodor Lukyanov, editor in chief of Russia in Global Affairs, wrote in Telegram:

“Peace Through Strength’ Is The Credo Of The New U.S. Security Strategy (…)

The new national security strategy puts forward a ‘peace through strength’ credo, as Trump and his closest associtates, such as National Security Advisor McMaster, constantly keep saying. The idea is clear, and to put it mildly is not new. The conviction implying that to sustain the peace one should constantly prepare for a war, exists in the classical thinking of strategists since ancient times. America is going back to its roots, so to say, rejecting the maxims of global leadership accompanied by global responsibility. Now everyone is for himself. In Russian, the slogan ‘peace through strength’ has different meanings. The first thing that comes to mind, is not sustaining peace through strengthening a potential, which is in fact the strategy implies, but a peace, which one has to sustain unwillingly contrary to desire – like when one needs to eat porridge in kindergarten, ugh… «

“THE NEW U.S. SECURITY STRATEGY IS A DECLARATION OF ECONOMIC WAR”

* Political Expert Vasiliev a senior research fellow at the Institute for U.S. and Canadian Studies at the Russian Academy of Sciences, said:

“The New U.S. Security Strategy Is A Declaration Of Economic War (…)

Applied to Russia, this document is a declaration of economic war. Our country is called a competitor. The ultimate goal is to lead Russia to bankruptcy or at least inflict substantial economic damage upon her. For us, it is probably even a bigger problem than ‘a traditional cold war’, since currently Russia is economically vulnerable. And in an economic confrontation all methods are good. It means that the sanctions policy will be continued, and it will stem from the logic of economic rivalry rather than from the logic of political reality. America is aiming at pushing Russia out of all international markets: military, agricultural and so on. Also announced was a policy of economically exhausting Russia via an arms race. The new doctrine’s focus is providing security through multifaceted development of military force and its modernization, including transferring the arms race to space. The ultimate goal of the U.S. in this direction is to establish military bases in the near space, possibly on the moon. »

the new U.S. security strategy is not an « axiom », serving as a base for future U.S. administration actions (…) The non-inclusion of the preemptive strike [concept] does not mean much, one should look the situation in a broader context. Whatever is mentioned in the strategy – does not matter much: a preemptive strike is fully possible.”

THE VIDEOS THAT COMPLETE THE ANALYSIS: 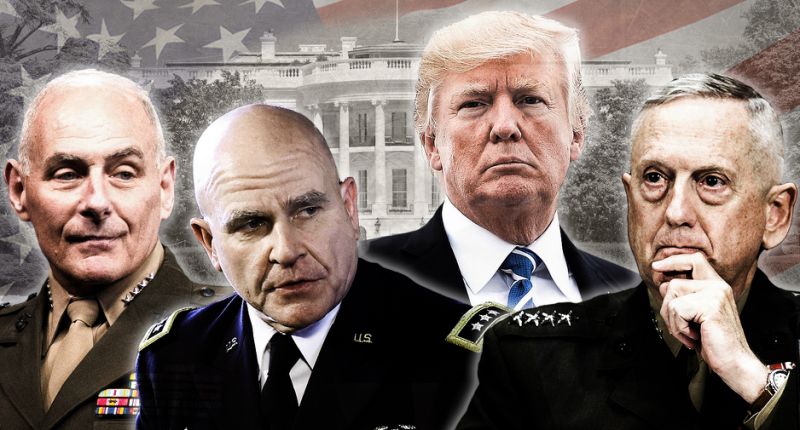 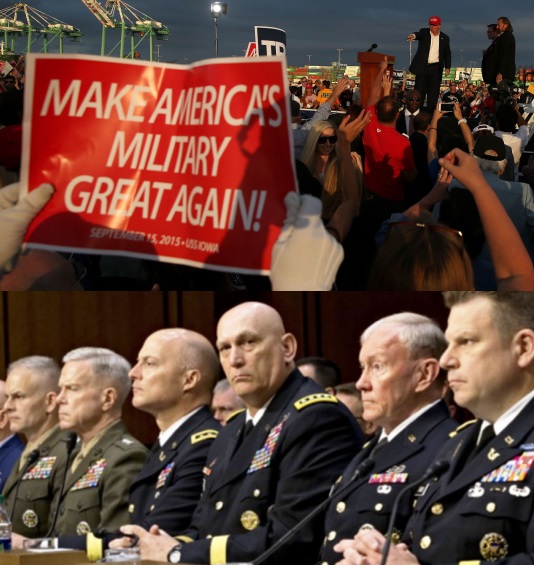