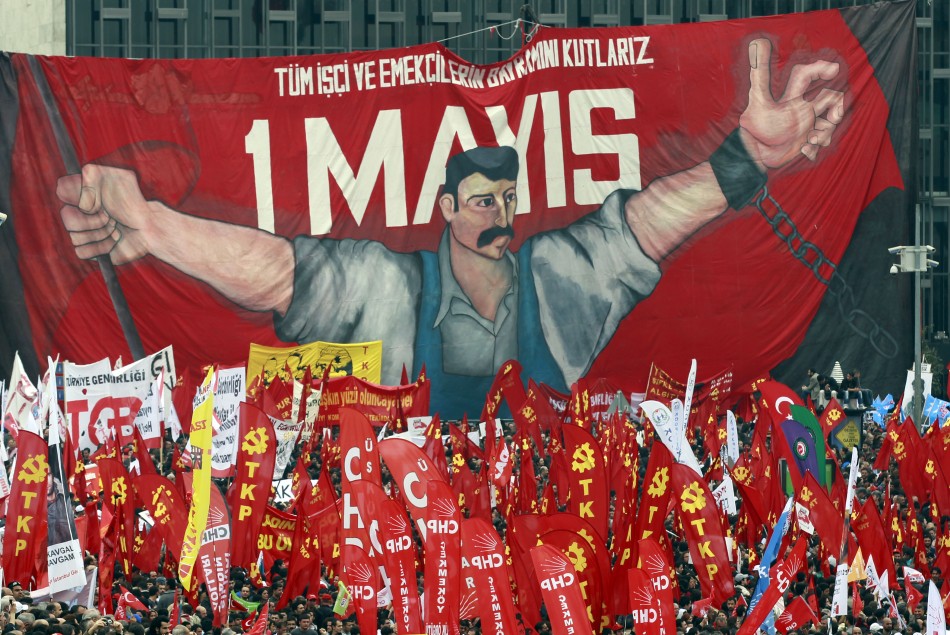 Enthusiasm grows in Maltepe where Istanbul residents flock to join the Labor Day rally, accompanied by slogan and music in Kurdish, Turkish, Armenian and other languages. The rally began with a minute silence and respect commemoration of those who lost their lives in the struggle for freedom and democracy. “Revolutionary martyrs are immortal”, shouted the crowd. The crowd also reacted to the decision to take HDP Istanbul Co-President Cengiz Cicek into custody.

DISK General Secretary, Arzu Çerkezoğlu said: “We are here celebrating Labor Day, before a regime change. This is an appeal to the people exploited and oppressed by this regime around Turkey. This is the photograph of the struggle we will carry on until 24 June and beyond. In a country where all words are spoken by only one mouth, workers are the main victims. Workers will stop Recep Tayyip Erdogan ”. Çerkezoğlu added: « This Labor Day is going to be remembered as day millions said No. Amon those who say No to this system are: intellectuals, journalists and politicians… We say No to the capitalist powers that take over the country. We are not alone. We are the real owners of this country. We will not leave this beautiful homeland in the hands of a dictator”.

KESK Co-Chairman, Mehmet Bozgeyik, began his speech by condemning the ban to use Taksim area. In his message Bozgeyik said: “We have seen yet again the face of the AKP-MHP alliance (AKP neo-ottoman islamist conservatives and MHP neofascist ‘grey wolves’) after its decision to call for a snap election. They want to survive, but we will not allow this alliance to take control of our lives and future. We will give the AKP-MHP alliance the response they deserved on 24 June. We say: long live peace, long live freedom”. Bozgeyik ended by saying: “We say No to the war policy to address the Kurdish question, No to the State of Emergency. Spring brings news of beautiful days. The workers will shatter the darkness. This is a fight for equality, freedom, secularism and democracy”.

GROUP MARCHING TO ISTANBUL’S TAKSIM SQUARE FOR MAY DAY DETAINED

The police attacked the groups who wanted to march to Taksim Square and detained 20 people. A group gathered in Beşiktaş in the morning to march to Taksim Square for May 1 International Workers’ Day, but were cut off by the police when they started to march towards Taksim. Following a short rise in tension, the police attacked the group and started to detain people. At least 20 people have been detained, while a tense wait continues in Beşiktaş.

La Cause des Peuples – The Peoples’ Cause – PCN-NCP-НОП